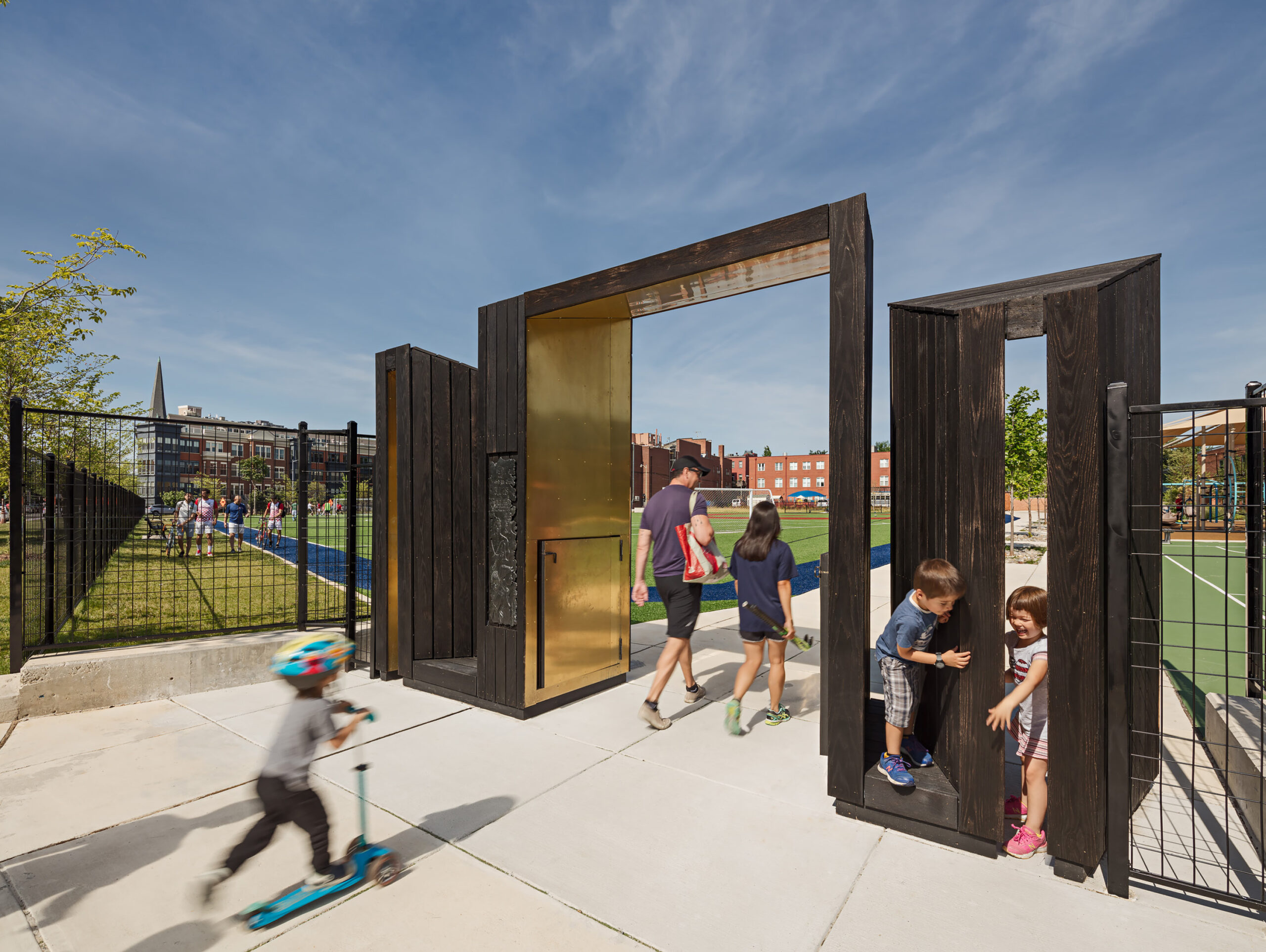 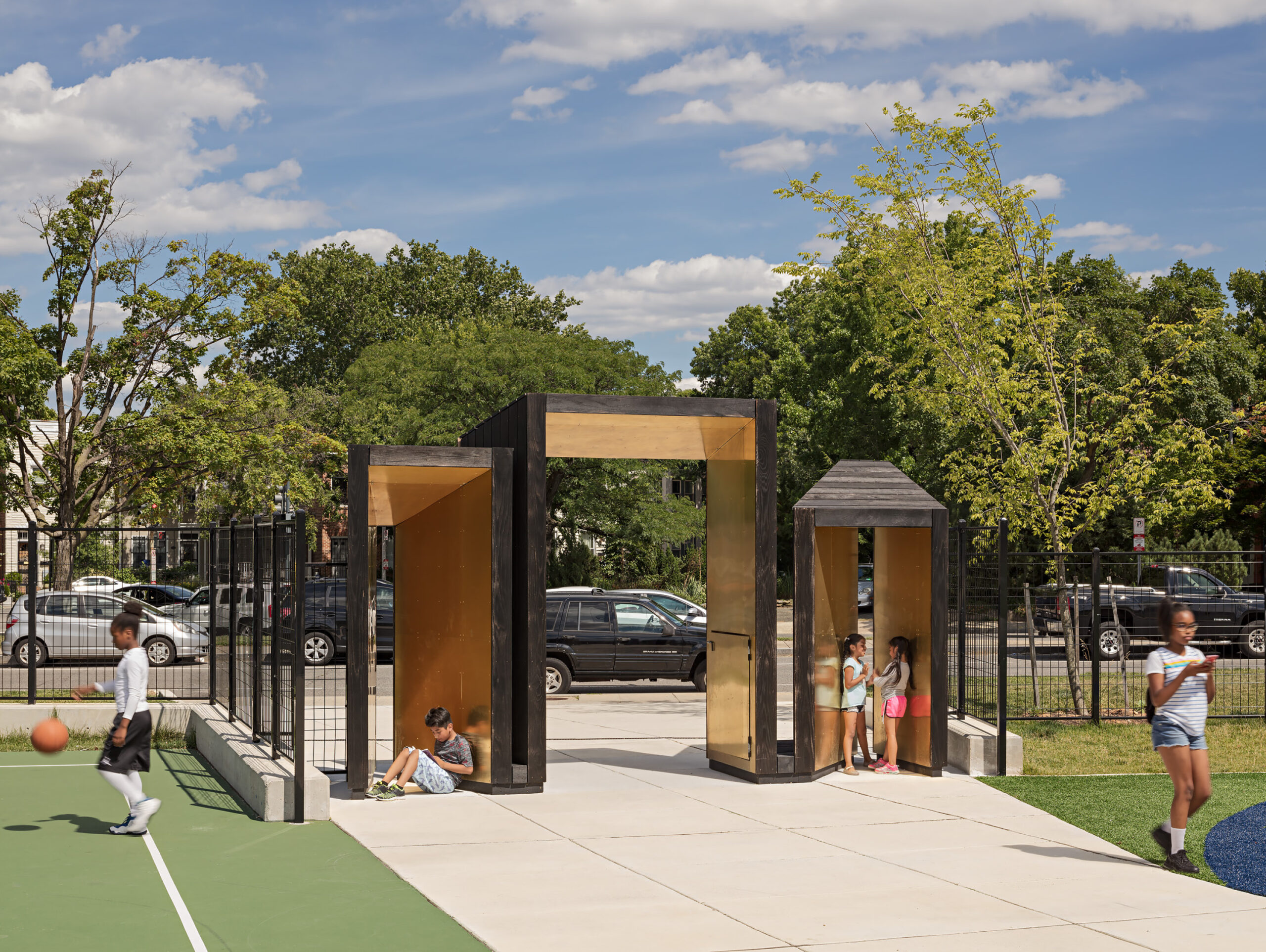 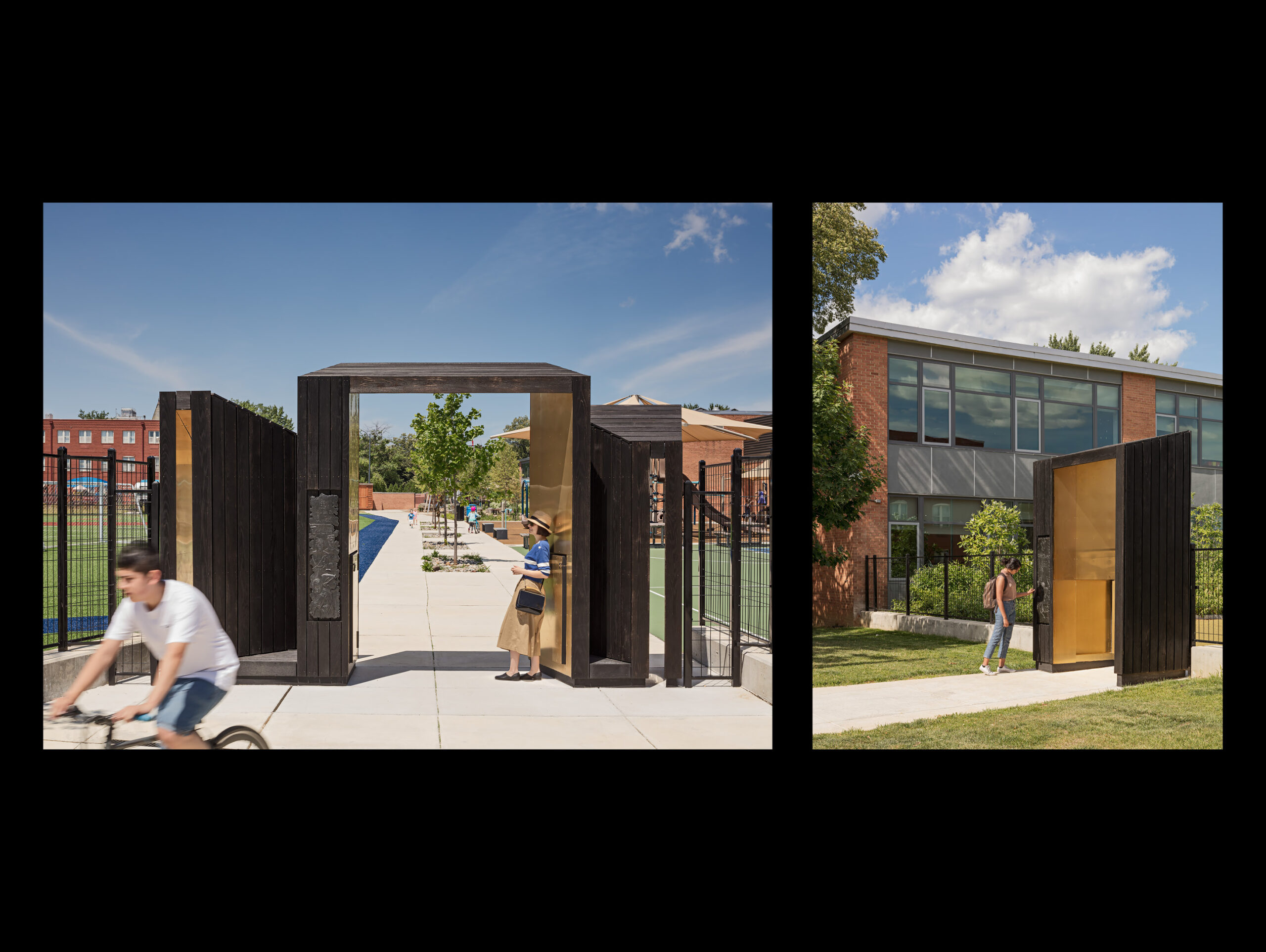 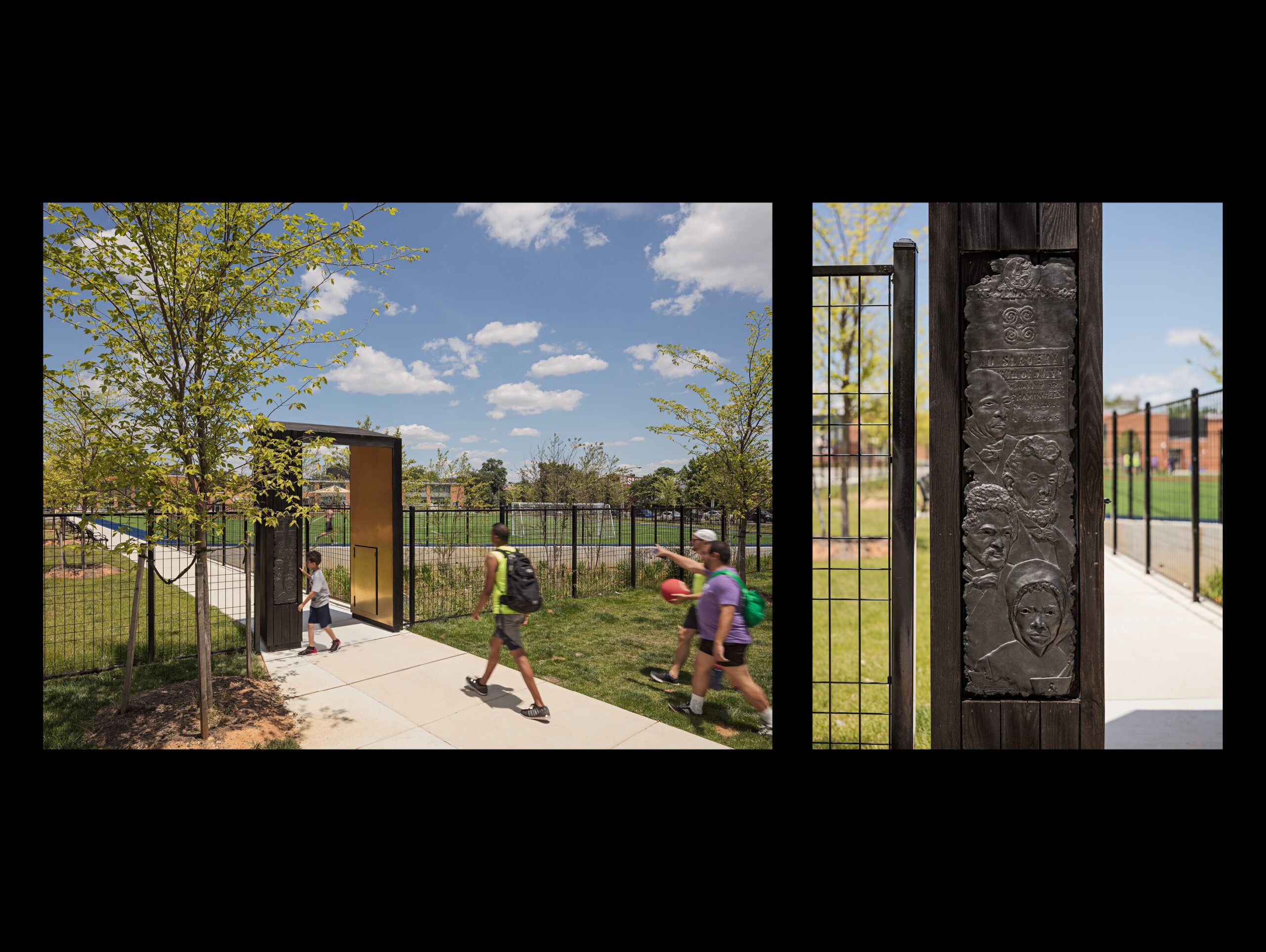 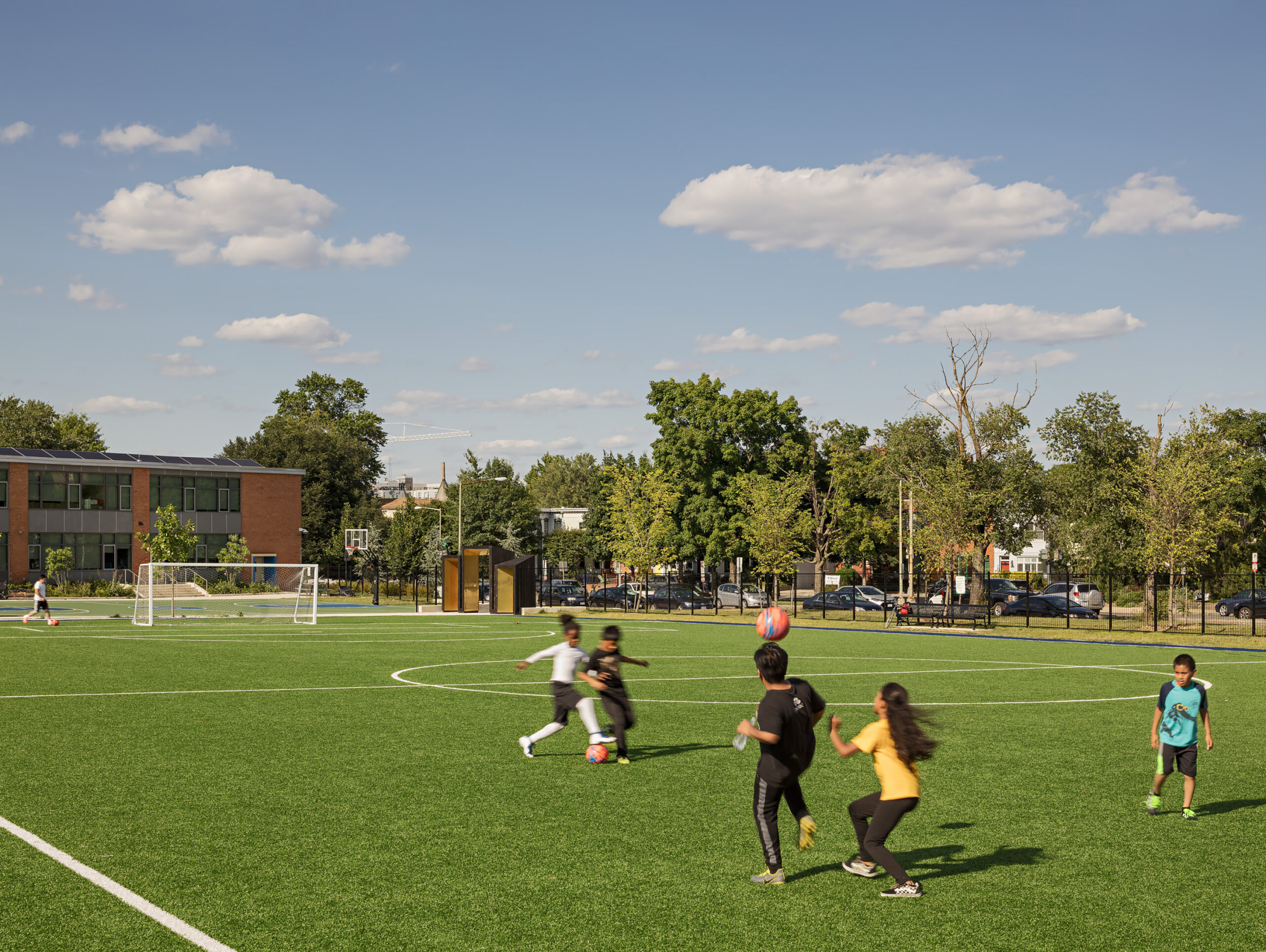 In a time when the role of monuments, particularly those to the Civil War, is being debated by many in the United States, this project aims to shed light on oppression rather than celebrate valor in battle, in turn developing an architectural approach distinct from the classical language and materiality of American monuments. The Camp Barker Memorial answers a project brief for the design of three entry gateways to an elementary school in northwest Washington, D.C. by framing the site’s history as Camp Barker, a Civil War ‘contraband camp.’ Union forces used the term contraband to describe formerly enslaved persons, who were considered captured enemy property. While the site’s original buildings were built as barracks for Union soldiers, they were soon transformed into housing for those escaping slavery. Living conditions in the camp were harsh but gave rise to the enduring community of the surrounding neighborhood. The design for the Camp Barker Memorial simultaneously addresses both the unmarked history of the site and the site’s modern day function as a public elementary school and popular public park. This duality was a challenge that the design team brought to the project, as the client originally asked for only a series of three iconic entry portals to the school grounds. The design team felt strongly that designing an entrance for the school should honor the site’s legacy as a contraband camp and make this history known to the community. The portal design recalls the informal settlement of Camp Barker with a series of structures that allow for passage and shading. A continuous folded plane forms floor, walls, and roof. On the playground side of the entrance, smaller side wings create habitable spaces within the thickness of the gateway that engage the scale of the child and encourage the young to contemplate the site’s history. The design subverts the typical Washington, D.C. monument – both in form (figural sculpture or colonnade on a classical pedestal becomes inhabitable folding form) and material (white marble becomes black wood). In contrast to the white marble monuments and landmarks that define the capital region, the portals’ exterior surfaces are clad in charred wood that recalls the strength and hardship of the community that grew out of this camp. Hardened and enduring, charred wood is UV, weather, rot, fire, and insect resistant. The brass interior invites personal reflection on the site’s history and casts a warm glow on the nearby area. Each of the three portals incorporates a recessed narrative bas relief sculpture by an artist known for her works celebrating African American history. Framing the entryways to Garrison Elementary School’s public recreation spaces, the Camp Barker Memorial asserts a new model of memorial intended to foster awareness and dialogue as part of the fabric of everyday life.