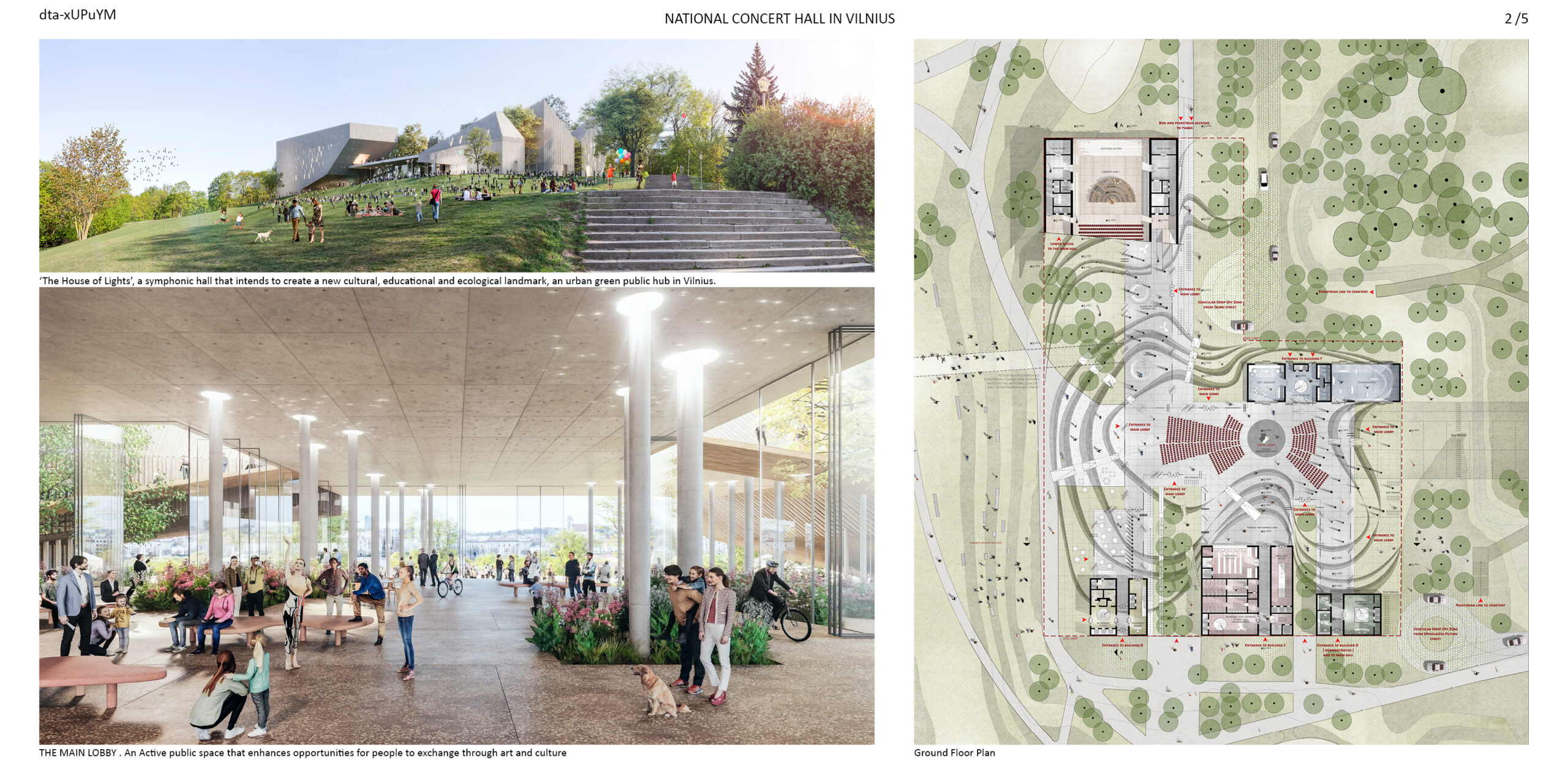 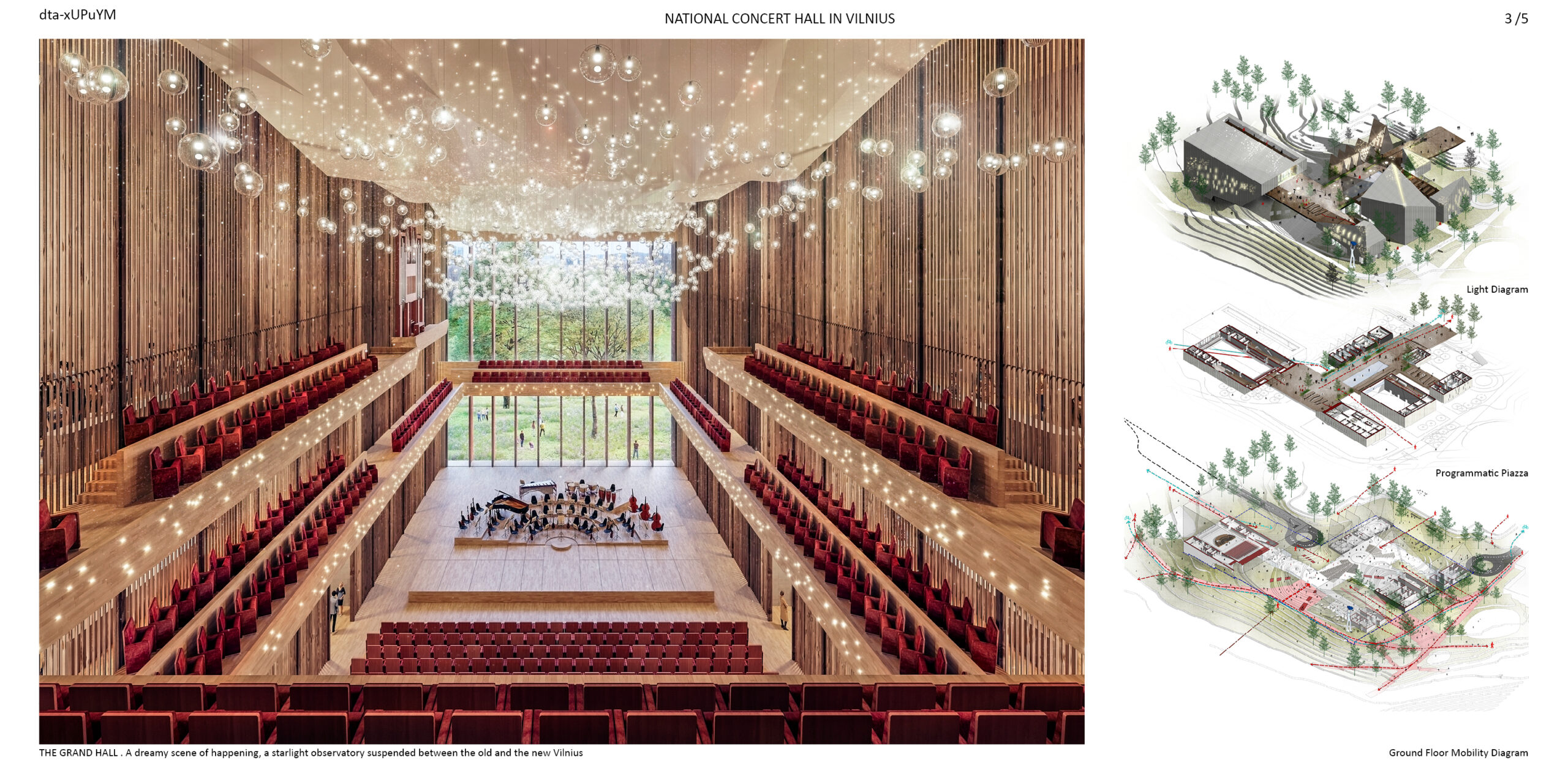 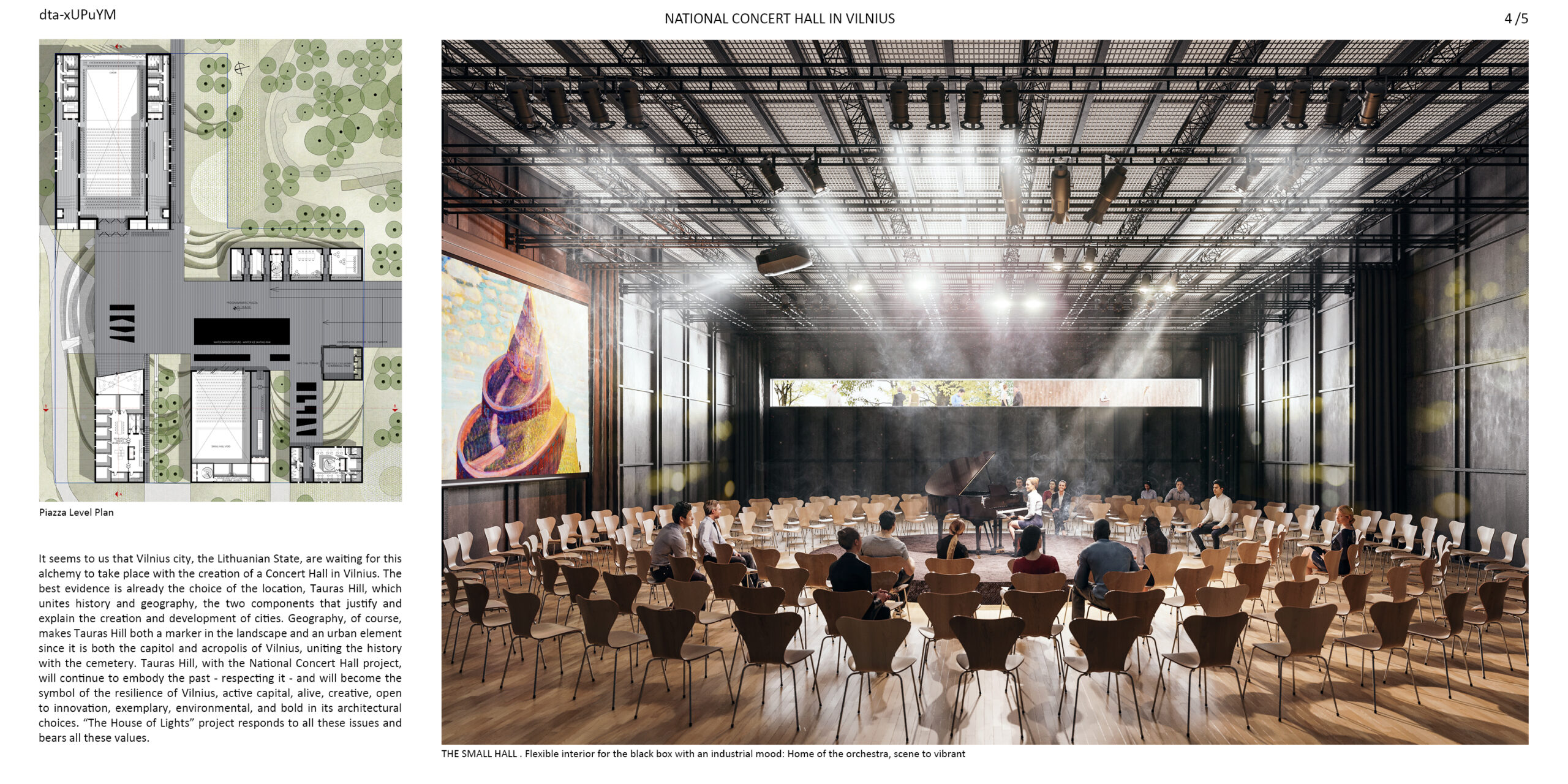 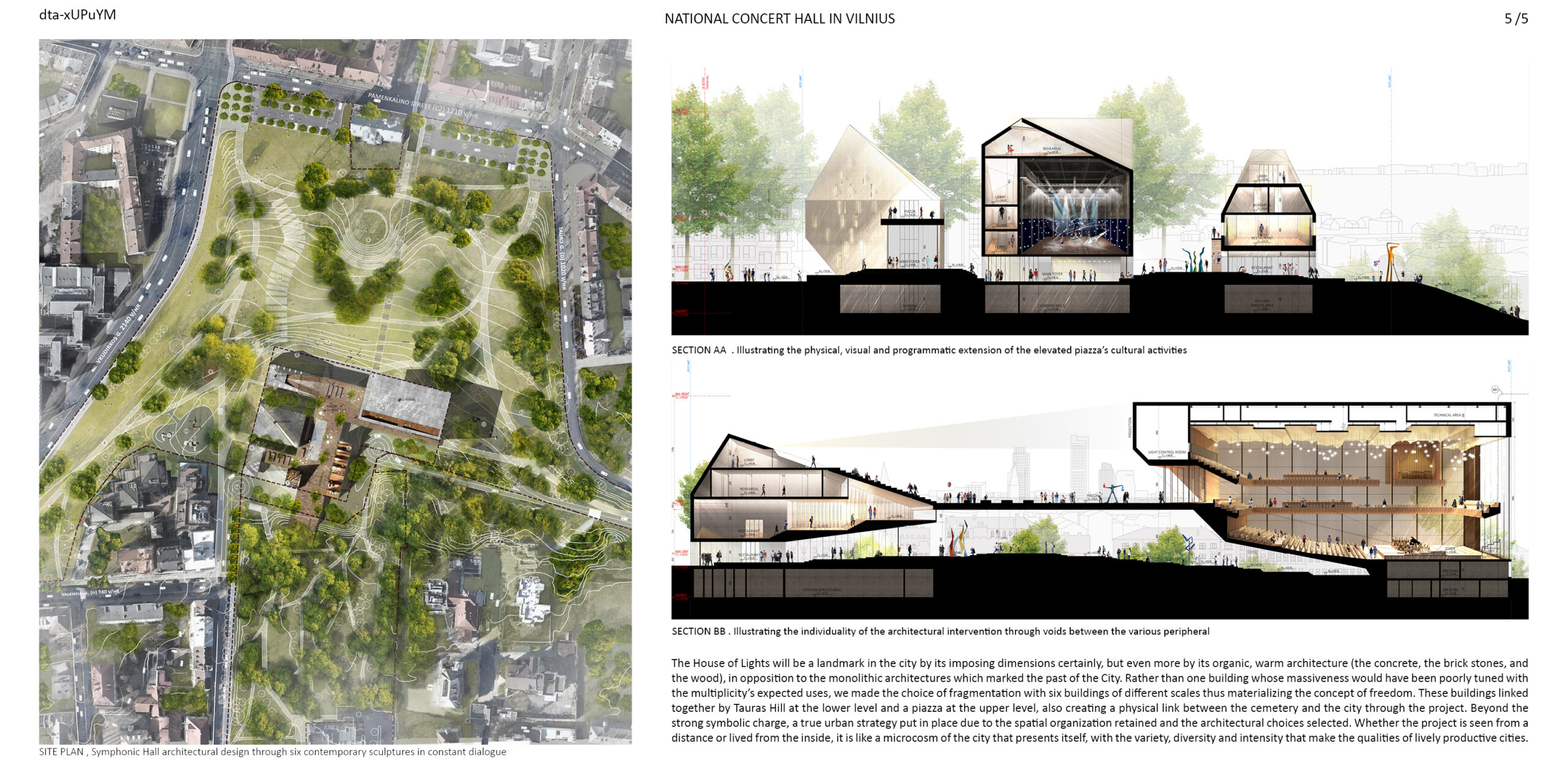 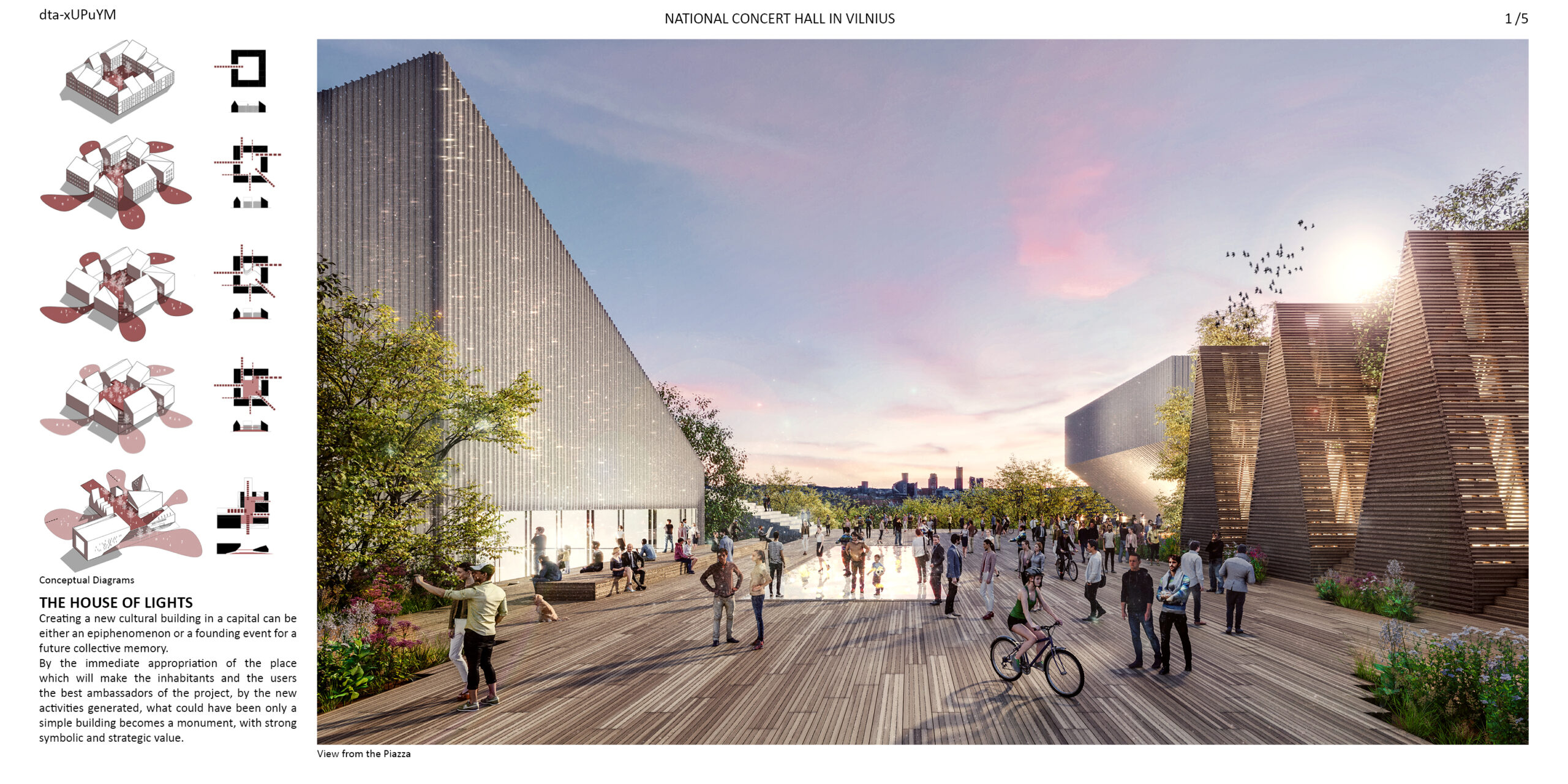 Creating a new cultural building in a capital can be either an epiphenomenon or a founding event for a future collective memory. By the immediate appropriation of the place which will make the inhabitants and the users the best ambassadors of the project, by the new activities generated, what could have been only a simple building becomes a monument, with strong symbolic and strategic value. The best evidence is already the choice of the location, Tauras Hill, which unites history and geography, the two components that justify and explain the creation and development of cities. Geography, of course, makes Tauras Hill both a marker in the landscape and an urban element since it is both the capitol and acropolis of Vilnius, uniting the history with the cemetery. Tauras Hill, with the National Concert Hall project, will continue to embody the past – respecting it – and will become the symbol of the resilience of Vilnius, active capital, alive, creative, open to innovation, exemplary, environmental, and bold in its architectural choices. &quot;The House of Lights&quot; project responds to all these issues and bears all these symbolic values.  Respect for Tauras Hill. The project chose to respect the site and its genius loci considering that it is the site which makes the project and not the opposite, because, in the present case, the site is powerful. It is therefore more of an osmosis, a fusion with the hill that has been sought after. The project enters into a dialectical dialogue with history. The project proposes to reuse the building materials that will be destroyed and integrate them into future buildings, thus operating a dialectic with high symbolic value and proving that the ruins of the past can help build the future.  A landmark Rather than one massive building, we made the choice of fragmentation with six buildings of different scales thus materializing the concept of freedom. These buildings linked together by Tauras Hill at the lower level and a piazza at the upper level, also creating a physical link between the cemetery and the city through the project. Beyond the strong symbolic charge, a true urban strategy put in place due to the spatial organization retained and the architectural choices selected.  A generator of urbanity and a demonstrator of a happy ecology. The true genius of a building is more in its capacity to offer comfort, pleasure and fluidity to those who frequent it. The concert hall is also the demonstrator of a happy ecology sublimating the surrounding landscape and simply and judiciously managing the issue of circulation. Breakthroughs opening visual and programmatic cones on the city will contribute to make the concert hall a precious &quot;postcard&quot;.  A landscape generator of urbanity, music and culture The proposed landscaping project seeks to respond to the landscape scale of the park as well as the architectural and urban scale of the Concert Hall by creating two well-differentiated and opposing interventions in dialogue with each other. These two landscapes, with very different atmospheres and typologies, express and reveal the complexity and opportunities of the space, turning it into a public hub of urban cultures. Finally, we believe that it is a project worthy of the ambitions of the City of Vilnius and the State of Lithuania, which, like many European capitals, will be equipped with a large cultural facility that will guarantee its influence beyond its borders.