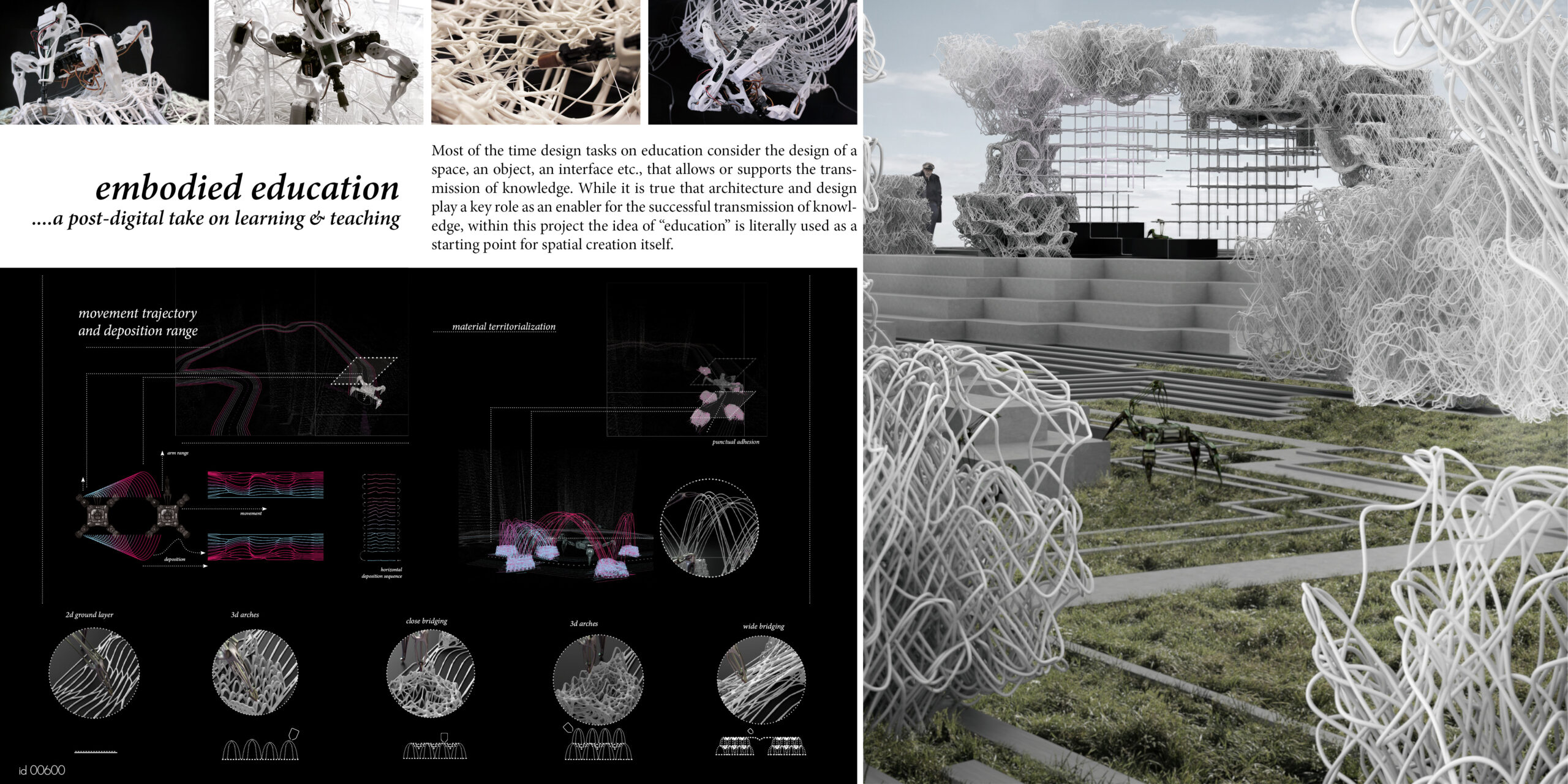 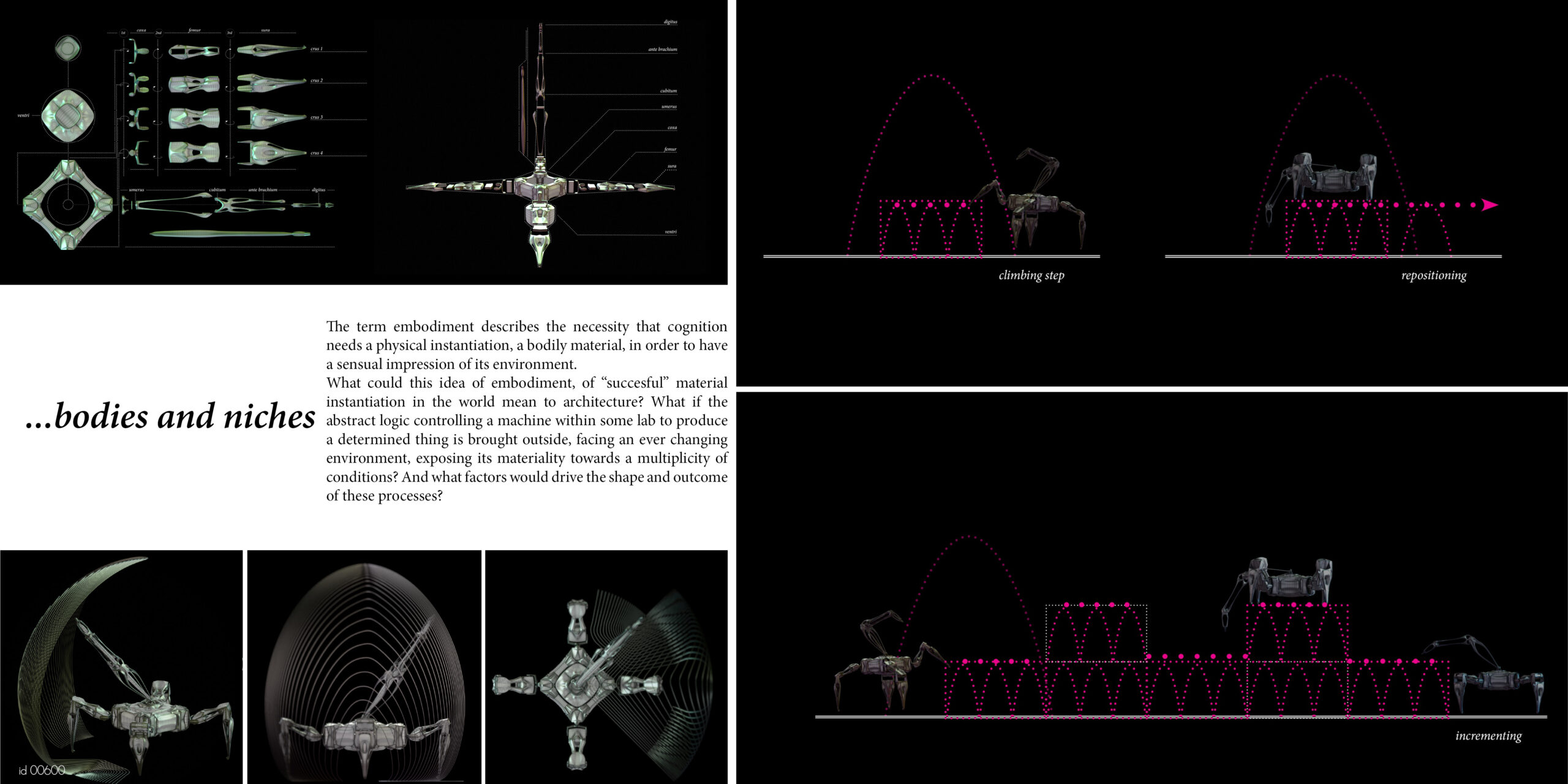 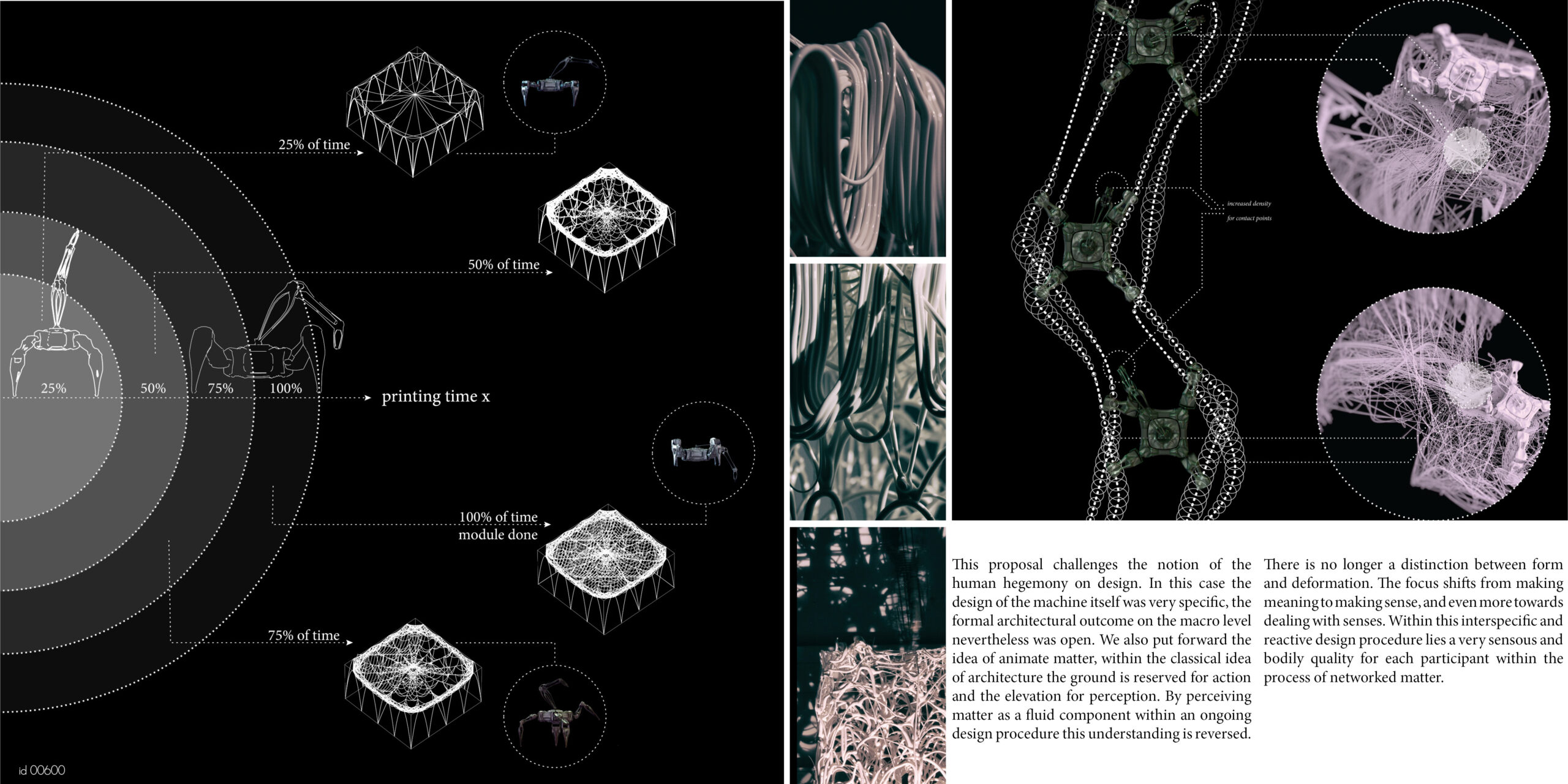 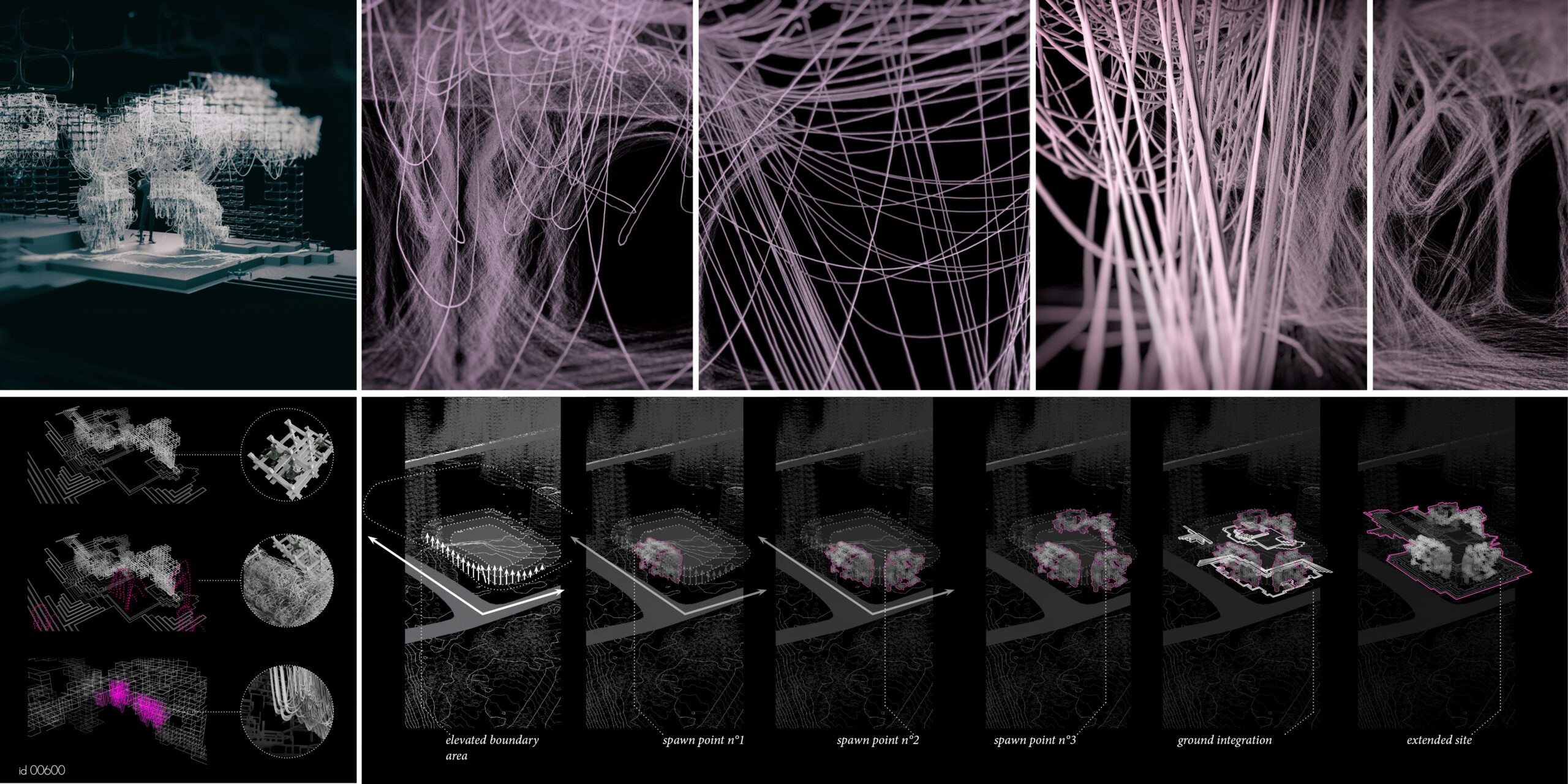 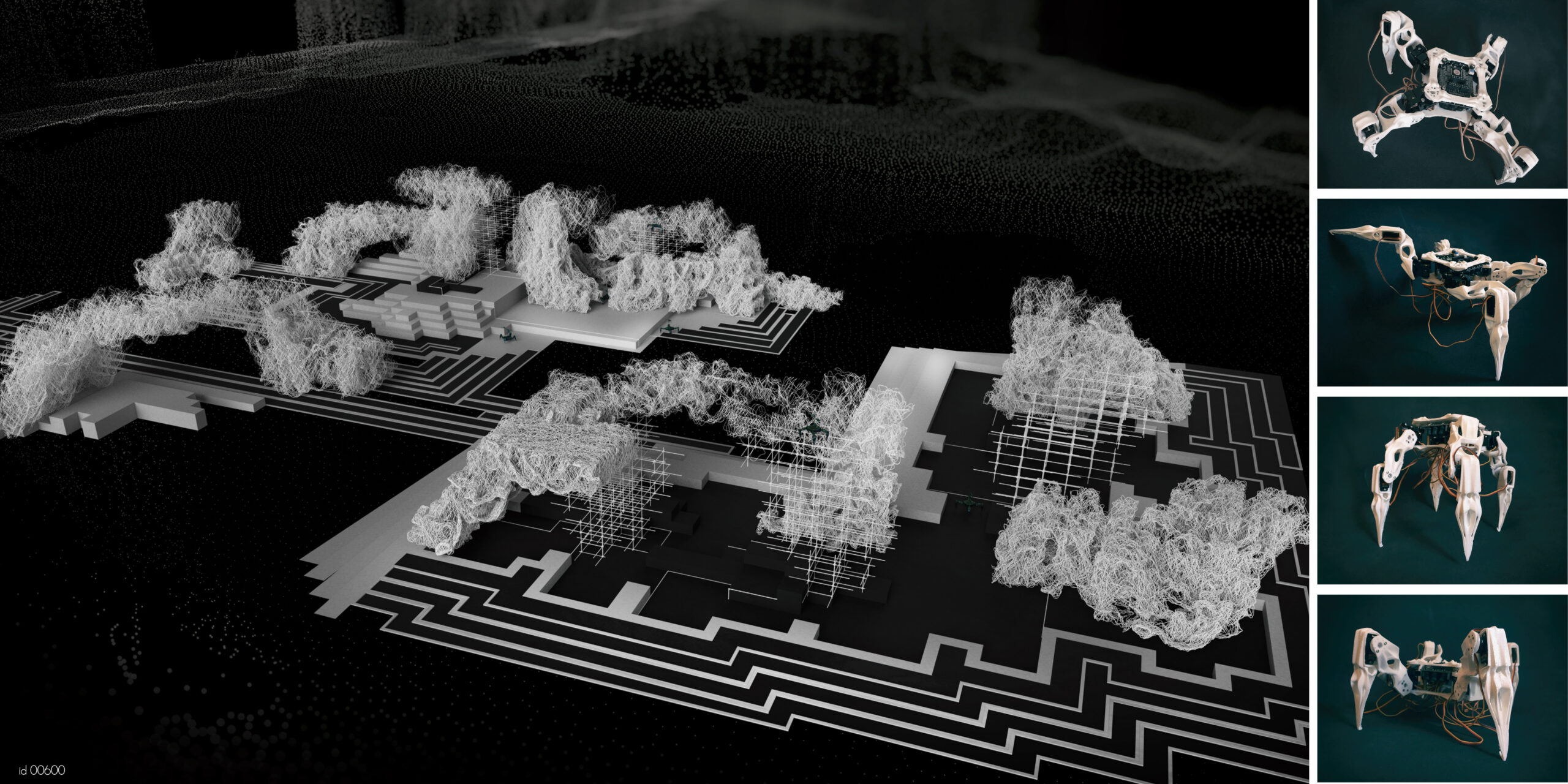 Most of the time design tasks on education consider the design of a space, an object, an interface etc., that allows or supports the transmission of knowledge. While it is true that architecture and design play a key role as an enabler for the successful transmission of knowledge, within this project the idea of “education” is literally used as a starting point for spatial creation itself. Today, we live in a world of ubiquitous computation. Advancements in information technology and sensing objects have fundamentally disrupted the way not only digital space is perceived, but also altered the way social interaction and learning is organized in our built environment. The organization of (not exclusively) human interaction in space is one of the main functions of the architectural discipline, it does so by organizing and programming matter into space. Within this project and option is proposed to literally integrate the idea of learning into a morphogenetic building process. Rather than creating a space for education, a machine is educated to create space. During the last years the term of “machine learning” has been heavily utilized to draw pictures in the range of the brightest future to the darkest ideas of humanity becoming the slave of its own technological creation. While speculating on a future scenario, this project lies its focus on the interspecific exchange between humans and machines that already is reality. While we are already heavily engaged with the feedback driven and open-ended organization of digital materials and production, the procedures used to materialize architecture still rely heavily on top down and deterministic approaches. Within this project we challenge this top-down approach and teach a machine to build an environment according to its own physical appearance. This project of niche-building is informed by its physical capabilities and the given function to deposit a filamentous material in order to build spaces that are meeting points of both human and machinic actants. Education is always a process of mutual learning, the things learned and understood heavily shape the way you interact with the world around you. We should be conscious about the fact that when teaching machines to do certain tasks, this will create an effect that reaches out not only into our digital environments but create a second layer onto the physical reality. More than a final form, this design proposes a process where both species are allowed to educate themselves freely in order to create an environment where education is demonstrated as an act of creation, not dictation.