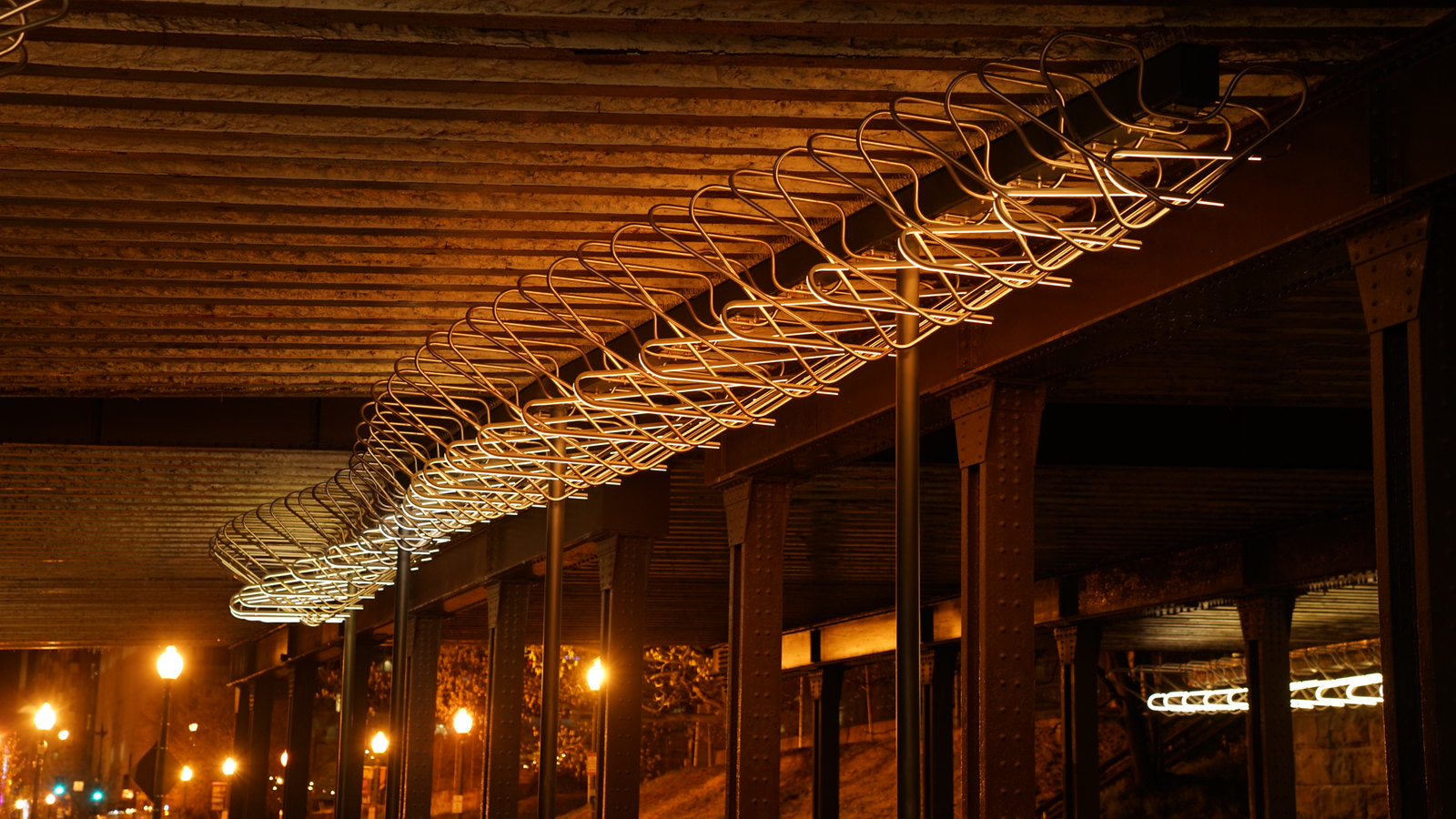 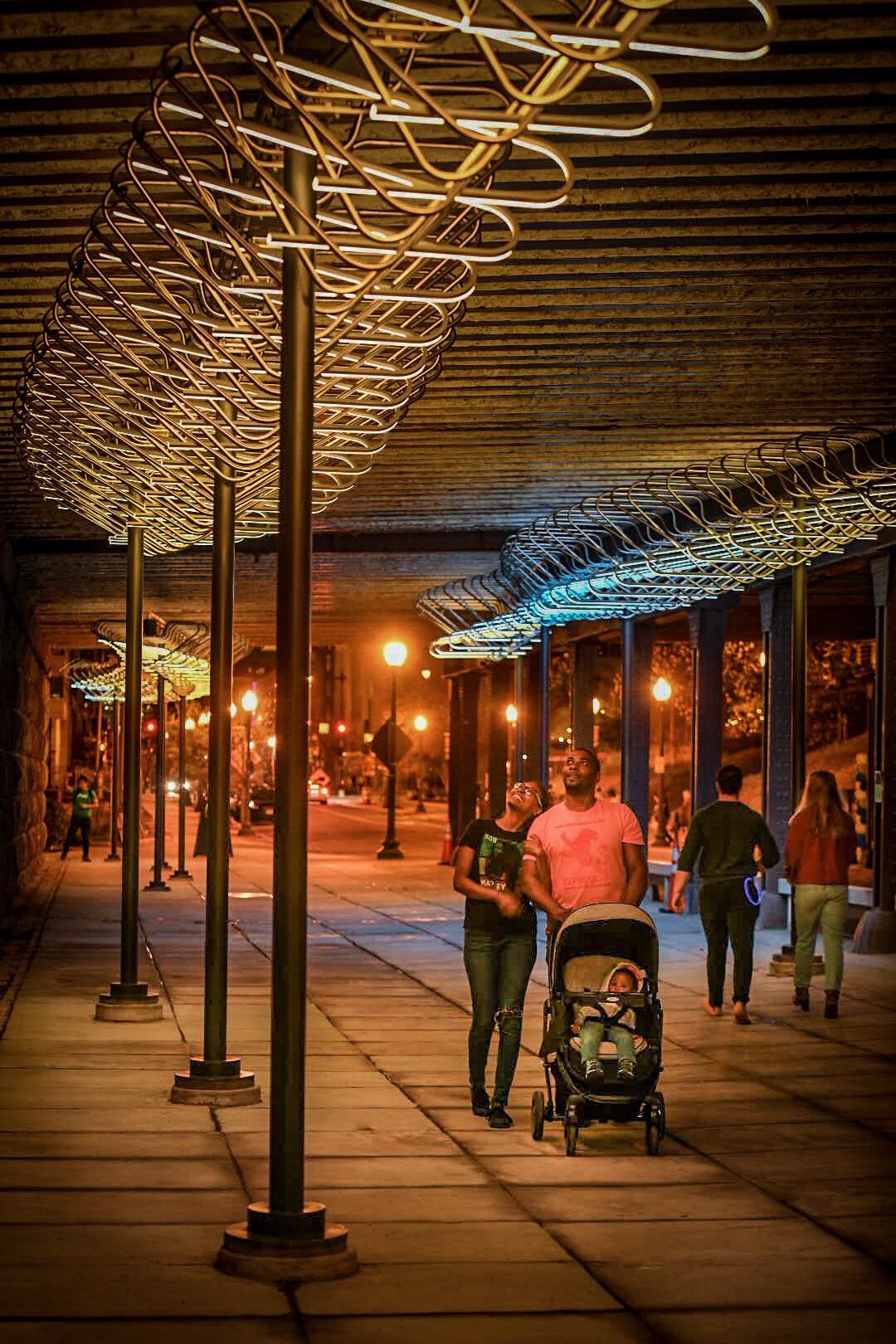 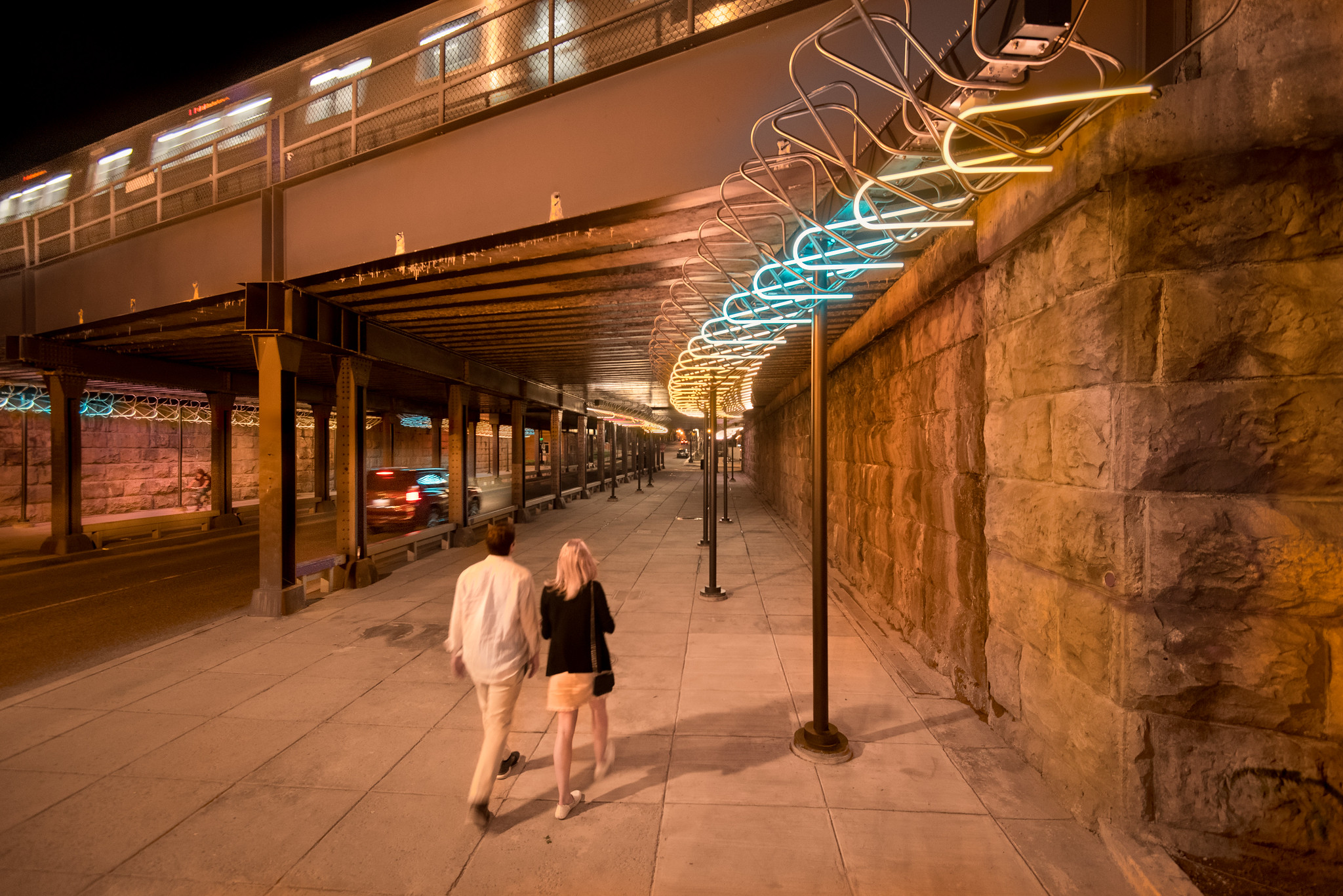 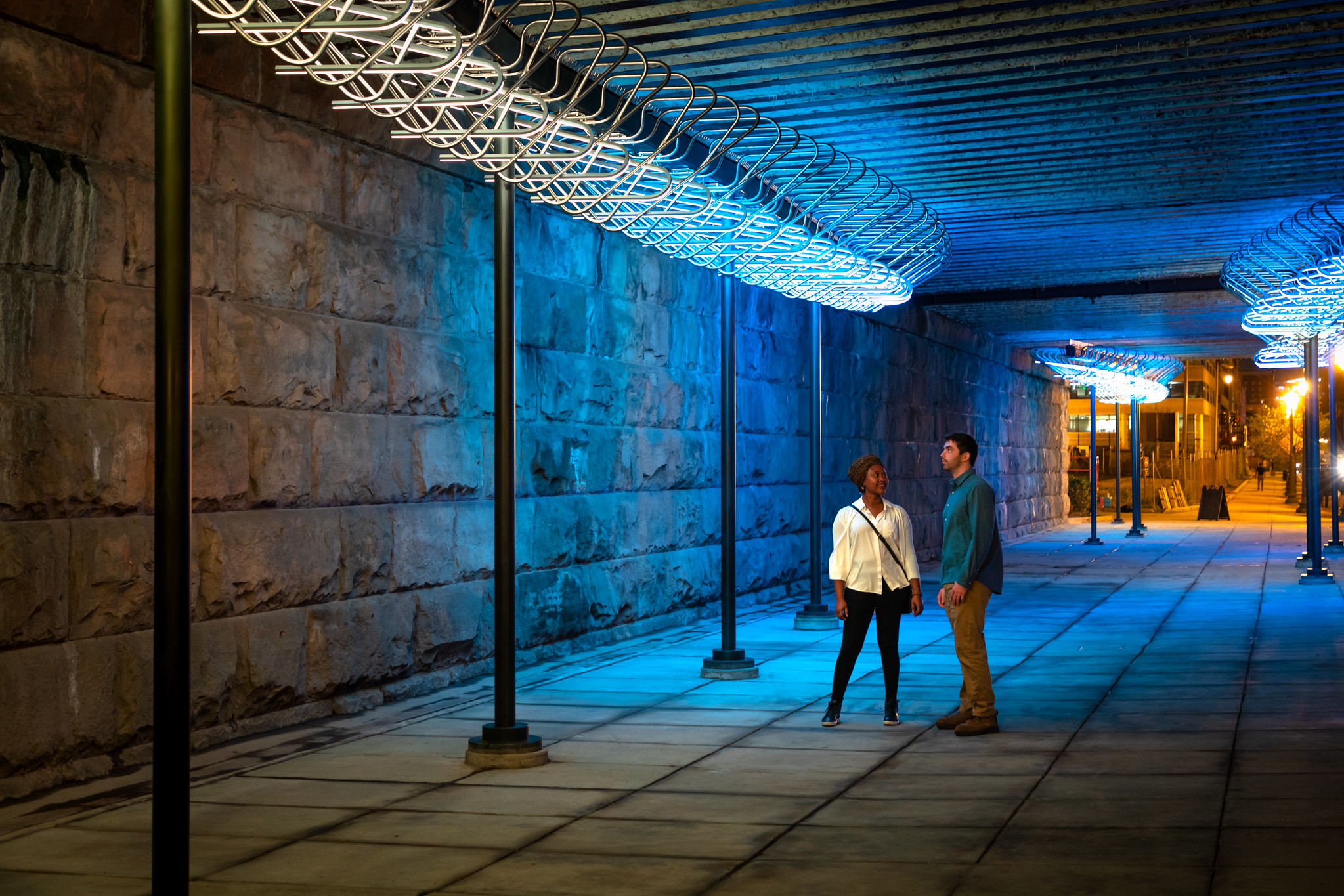 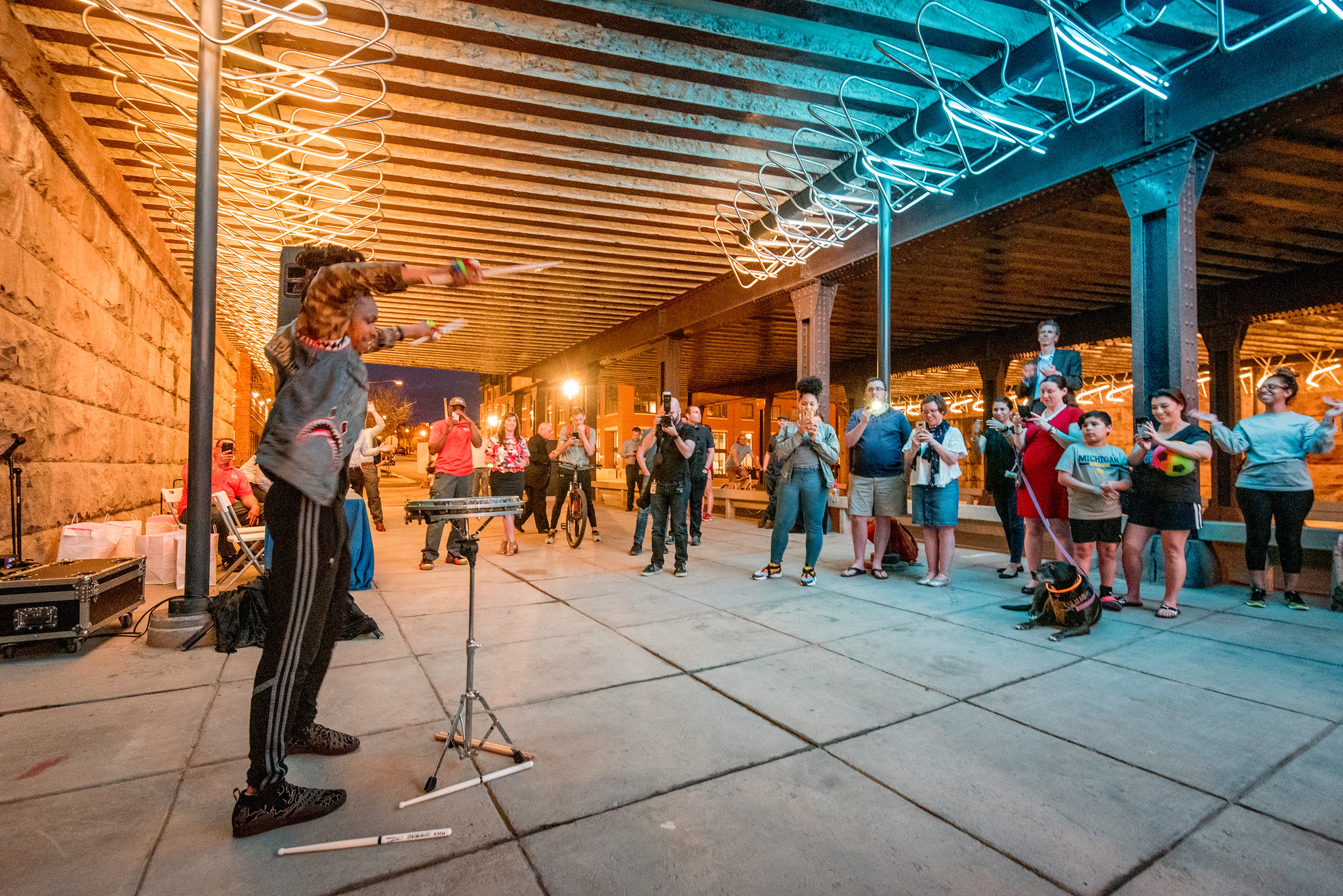 A SERPENTINE CHANDELIER THAT BRINGS LIGHT, INTERACTIVITY AND PLAYFULNESS TO A RAILWAY UNDERPASS. Our cities are riddled with left-over and abandoned spaces; slots of land between highways and abandoned lots; spaces that lack jurisdictional clarity and are therefore left neglected. These spaces fragment the city fabric and separate neighborhoods, creating sectioned off urban spaces and non-defined territories. What if we could take these spaces over and transform them into active, dynamic and catalytic spaces? What if we could use them to stitch the urban fabric back together again? Could they become catalysts for urban change? Lightweave is a permanent installation that attempts to address these issues. It uses light to weave two neighborhoods together again, neighborhoods that had been previously severed by infrastructure. Lightweave is a large urban chandelier that snakes through a pedestrian underpass, and is bound by the sidewalk, multiple train track lines above, bicycle and vehicular travel lanes, and a large stone wall. The project takes on multiple parameters, by occupying the amorphous volume between jurisdictions and uses. It is both a sculptural canopy and a light fixture that emits enough light to safely move pedestrians through; it is artwork that beautifies and activates the underpass, and a way to render an otherwise dark and unwelcoming space safe and well-lit. Lightweave translates ambient sounds from the city into dynamic auroras of patterned LED light. Slowly changing effects are activated by the noise and vibration of passing trains, cars and other sounds from the neighborhood. Lightweave animates the underpass and creates a meditative and interactive urban experience. The artwork consists of six 65’ long curvaceous sections (390’ total) of suspended stainless steel and LED lattices. Lightweave is mounted ~11’ above the sidewalk on a steel column and beam structure that does not touch the underpass above in any way, due to emergency accessibility requirements for the train tracks above. Each section contains 26 computer-controlled LED modules. Sensors embedded at various locations in each section feed information to a computer which triggers variable and overlapping responses from the LEDS. Individual vibrations send cascading lights through the tunnel, rendering the whole installation as a barometer of activity, a way to read the city and connect to its infrastructural pulse in a more intuitive and visceral way.