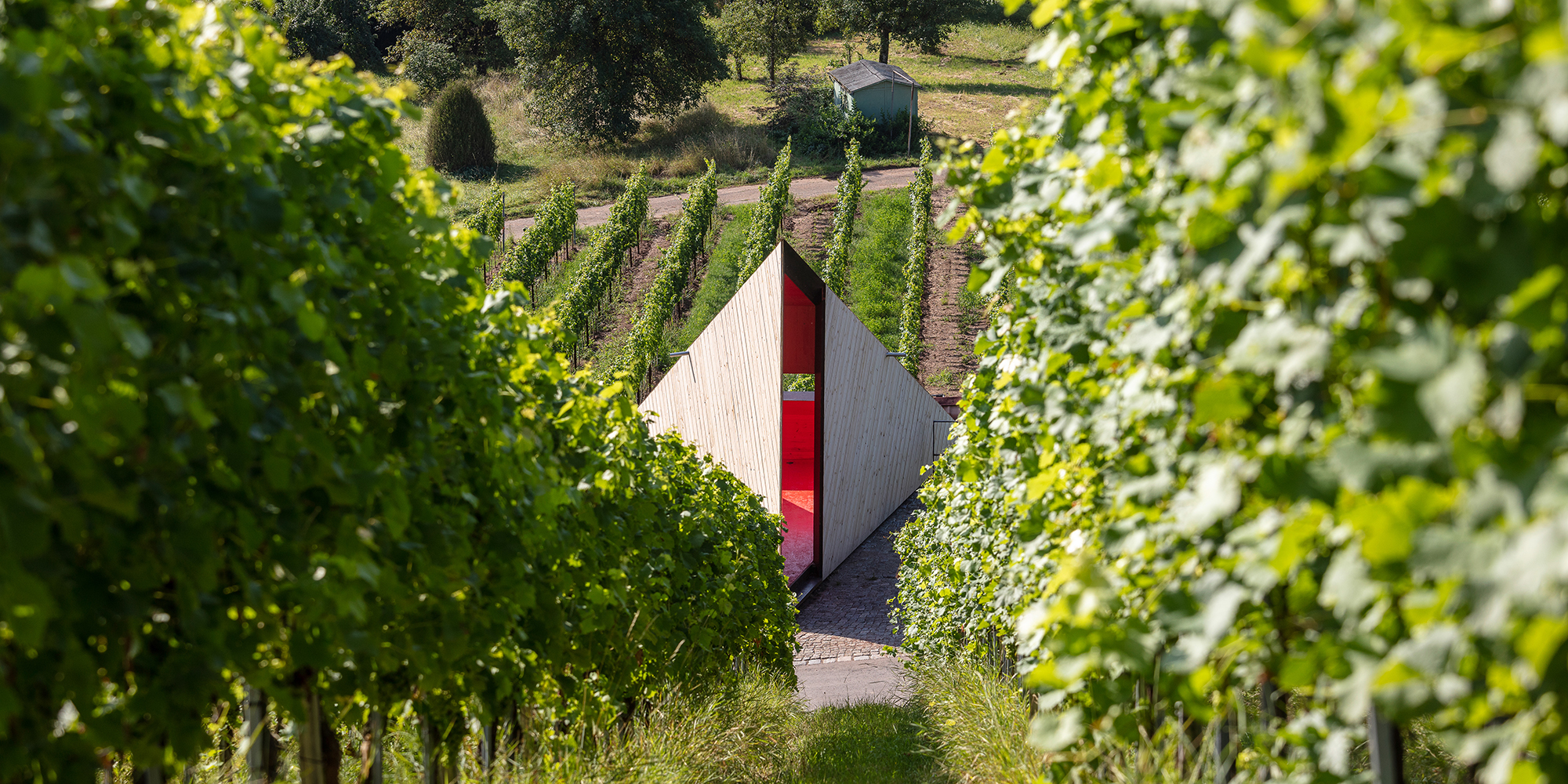 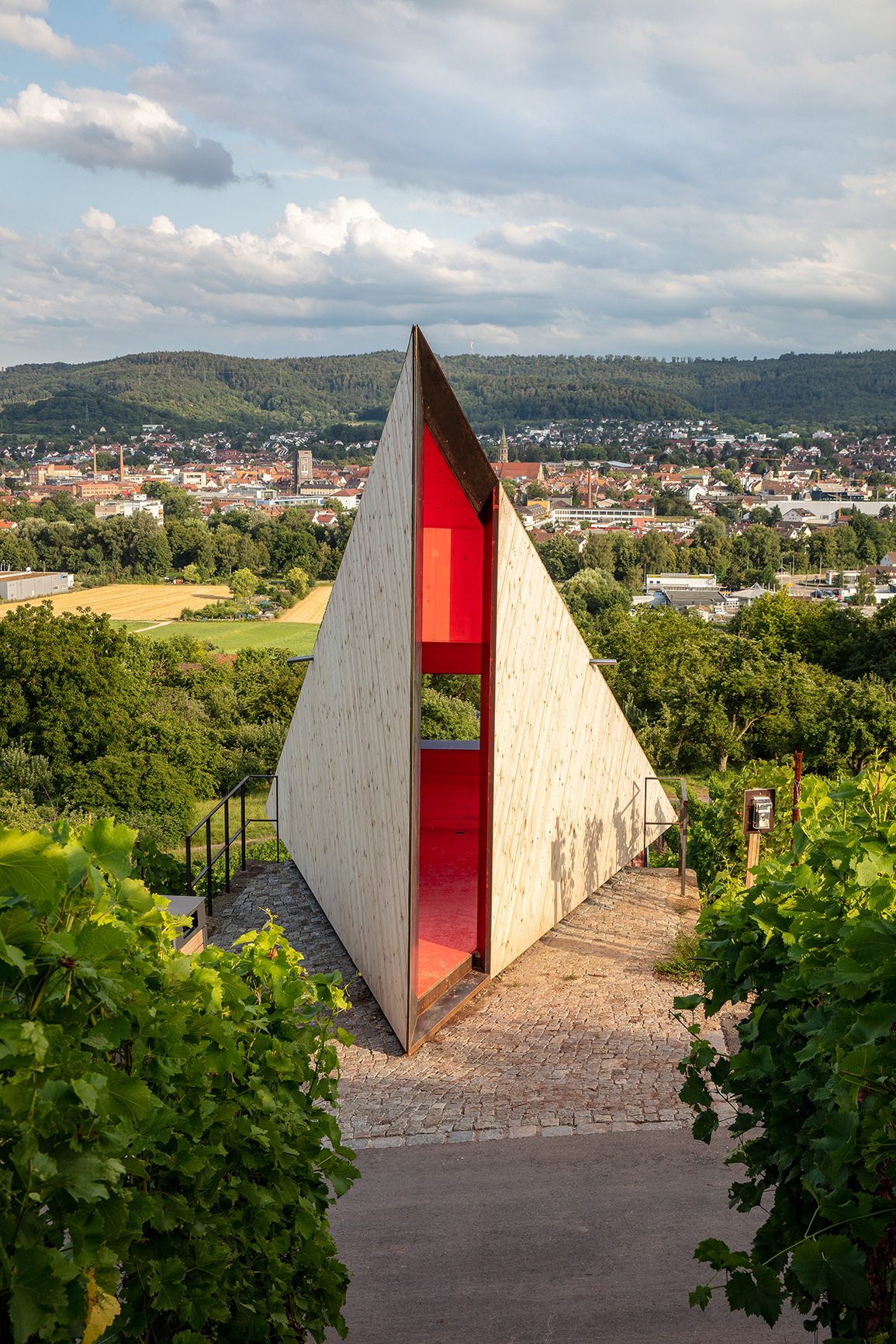 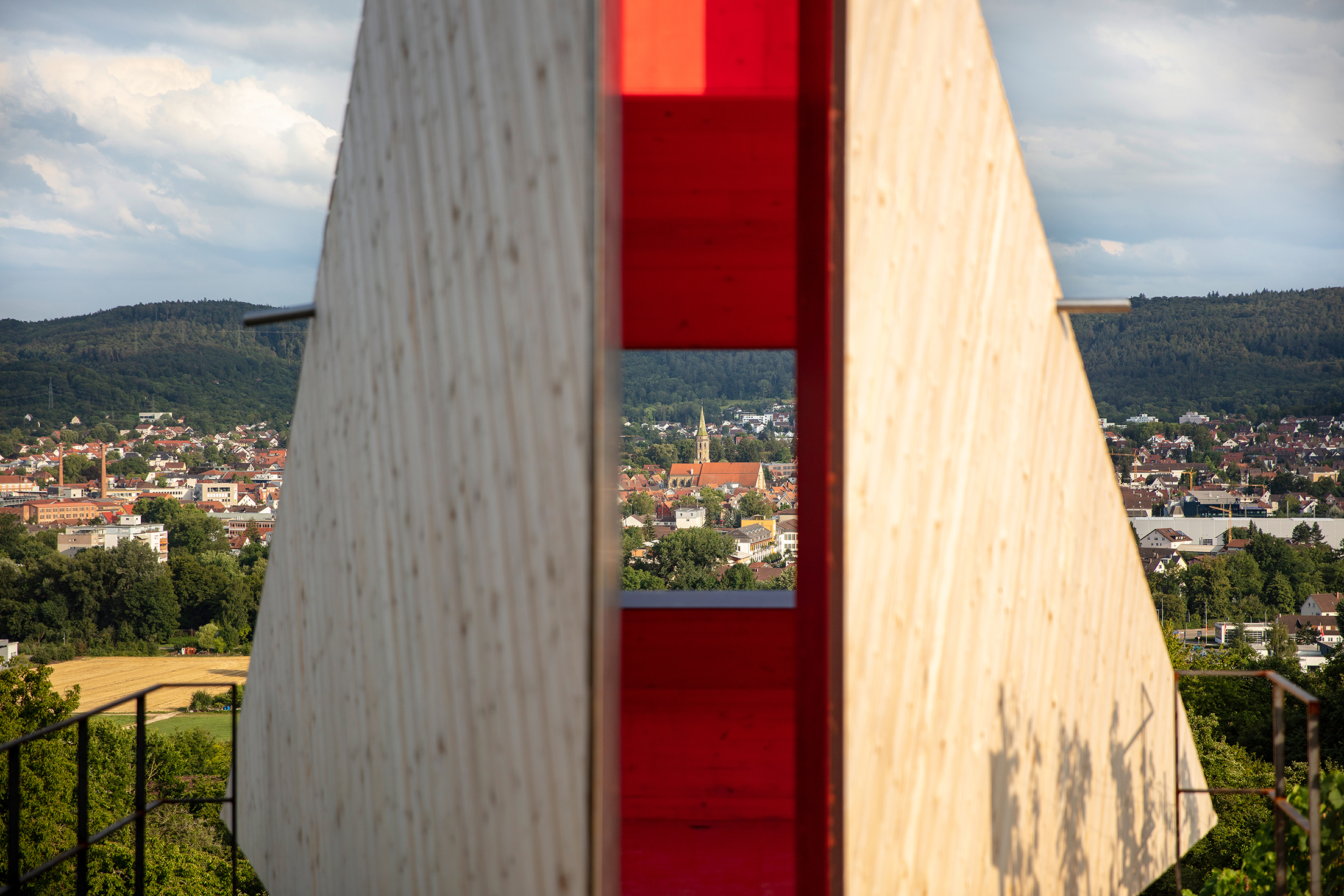 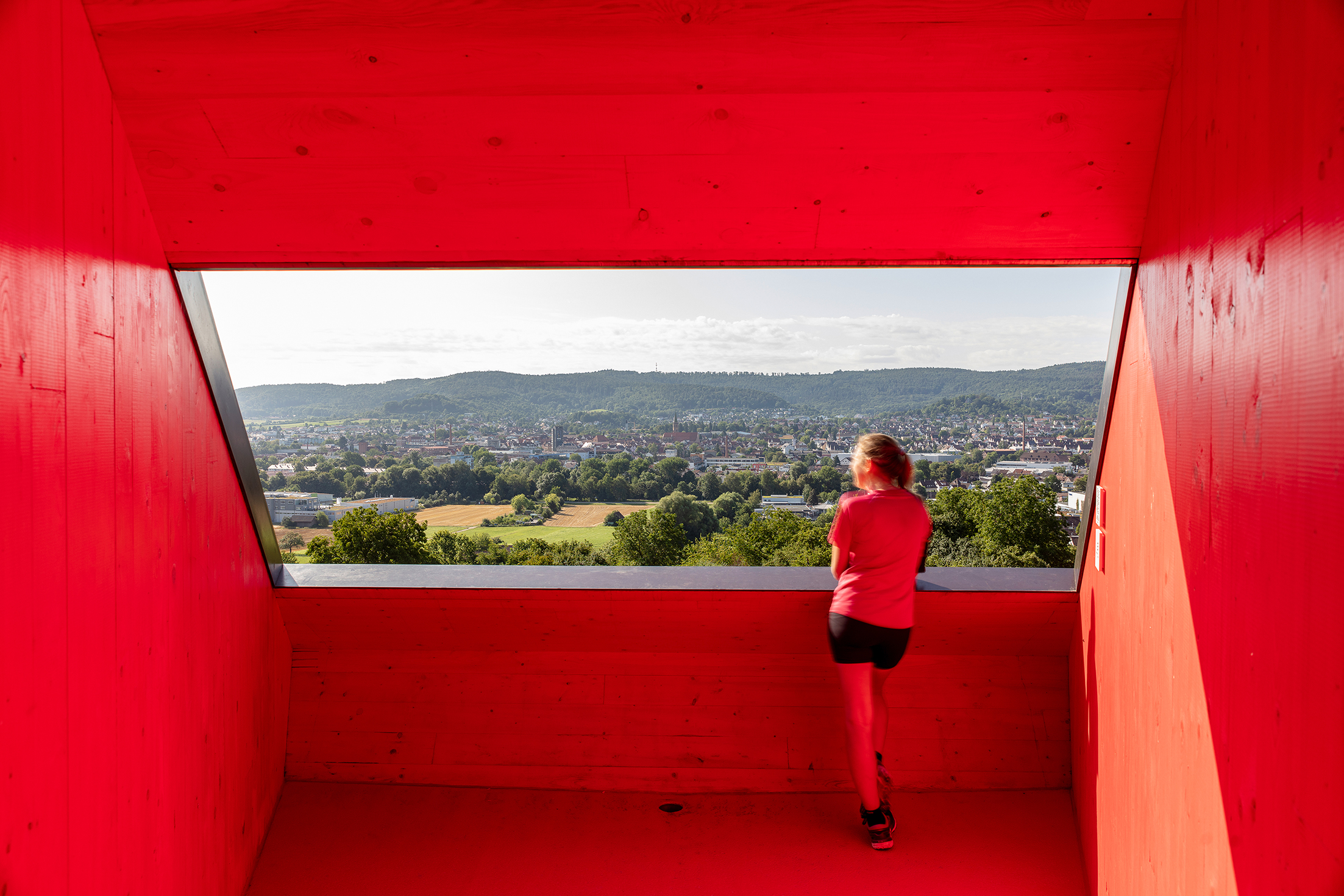 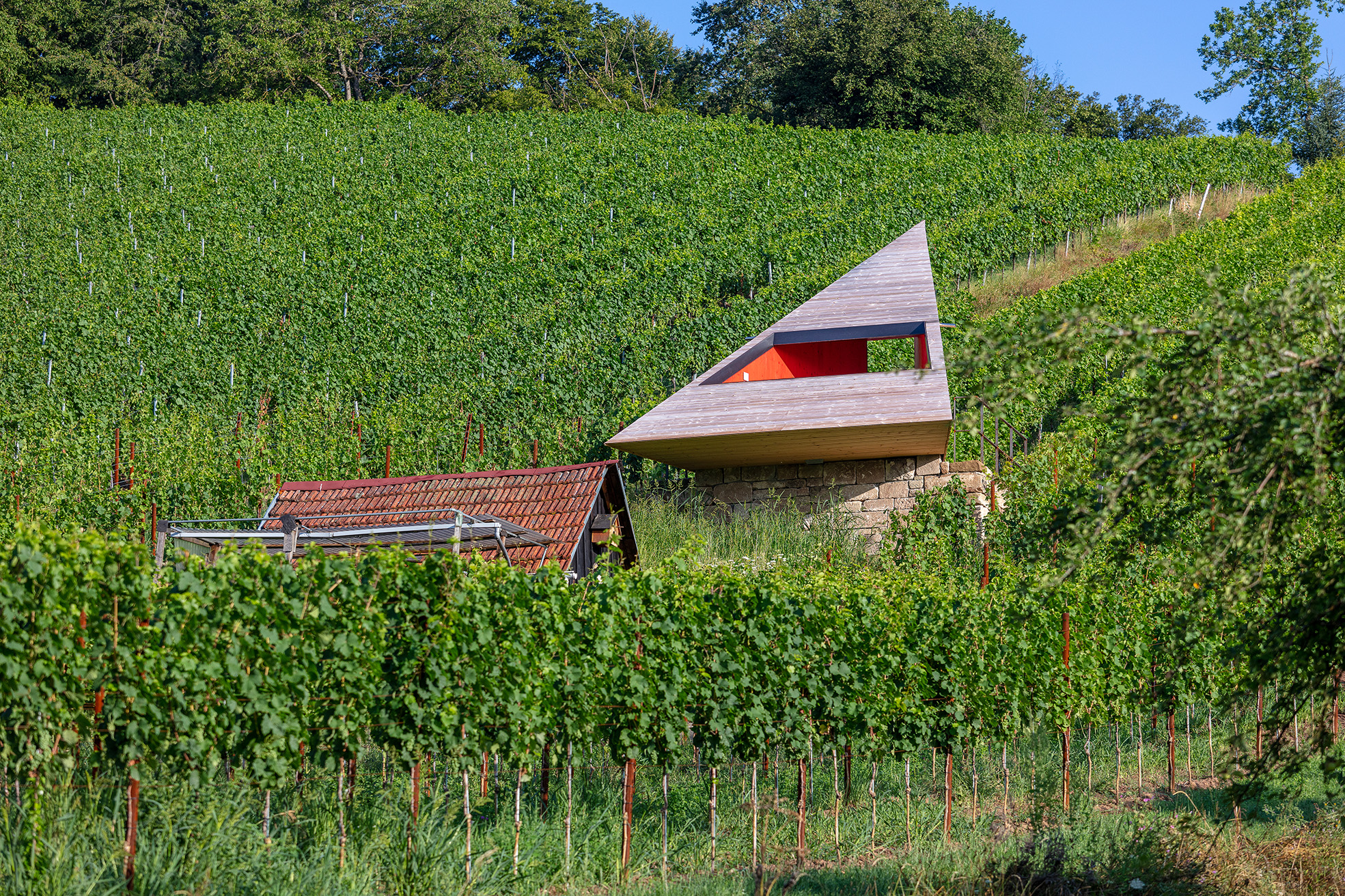 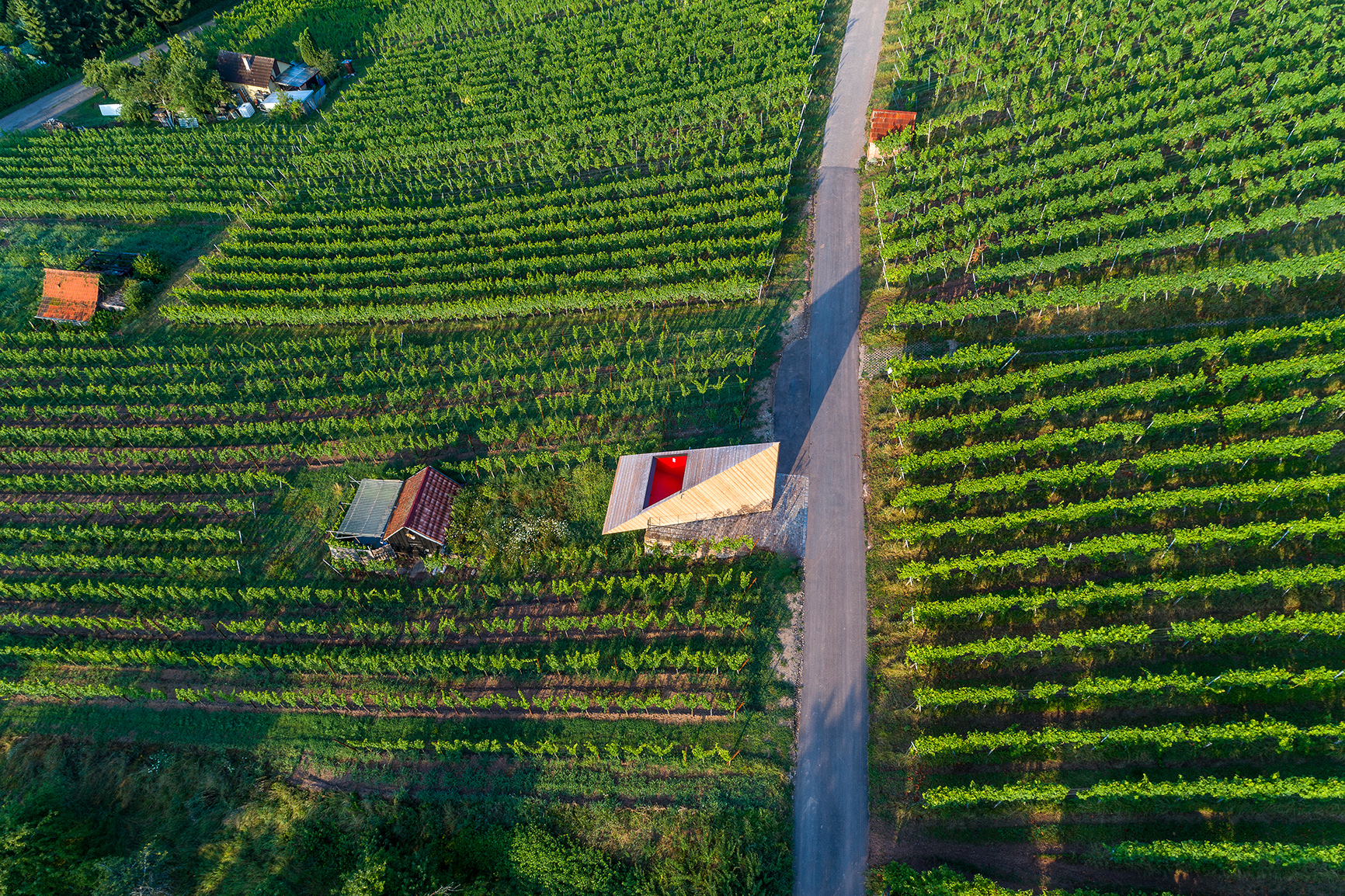 The spatial sculpture “Prisma” – prism in German – is schneider+schumacher’s contribution to the city of Schorndorf as part of the Remstal Garden Show 2019. The design focuses on the special landscape space of the Remstal and, with the geometric minimal body consisting of four points and six lines, forms an accessible place to discover, linger and gaze into the distance. In the midst of the linear structure of the vines, halfway up the slope, the tetrahedron-shaped prism rises on a found bastion, which, in order not to compete with nature, is constructed of glulam panels. It takes up two opposite references to the landscape: The horizontal opening is oriented towards the valley with a view towards the Schorndorf church. The vertical opening creates the entrance and faces the vineyard path, vineyard slope and the forest above. Access to the interior – initially hidden from visitors coming from the valley – is from the west side. Exterior and interior effects are formulated as contrasts and underlined by the materiality and colorfulness. To the outside, the room sculpture presents itself as a widely visible landmark with a comparatively ordinary wooden boarding, while inside it creates intimacy and warmth with a red coating. The space is lit through the two slits, which, like picture frames, focus the views of the landscape and thus emphasize the perception of the framed sections. Structural report: The construction of the prism is composed of four triangular surfaces that form a three-dimensional body. The load transfer of the prism is realized by a single span girder with two cantilevers. The shorter cantilever length is about 4.65 m, the longer cantilever length is 7.5 m. In the direction of the shorter cantilever, the structure widens in width and tapers flat. In the direction of the long cantilever, the body tapers upwards and reaches a height of 5.1 m. Due to a coordinated choice of cantilever lengths and the position of the support points in combination with the geometric shape of the body, the center of mass of the structure is above the support points. This results in a “seesaw” that is in equilibrium solely due to the mass distribution of the construction itself. There are no lifting loads due to the dead weight. The small uplifting loads from the eccentric traffic load are overpressed by the higher dead weight. As a panel-shaped, large-format material, cross-laminated timber is a suitable material because its low dead weight and high degree of prefabrication facilitate assembly on site and shorten the construction time. In order for all the panels to act together as one structure, the joints must be designed to transfer shear in the joints in addition to vertical and horizontal forces. A bolted step section could transfer vertical and horizontal compressive loads through contact surfaces, while the bolts could transfer the other load components on pull-out and shear. The foundation is provided by a simple single foundation.