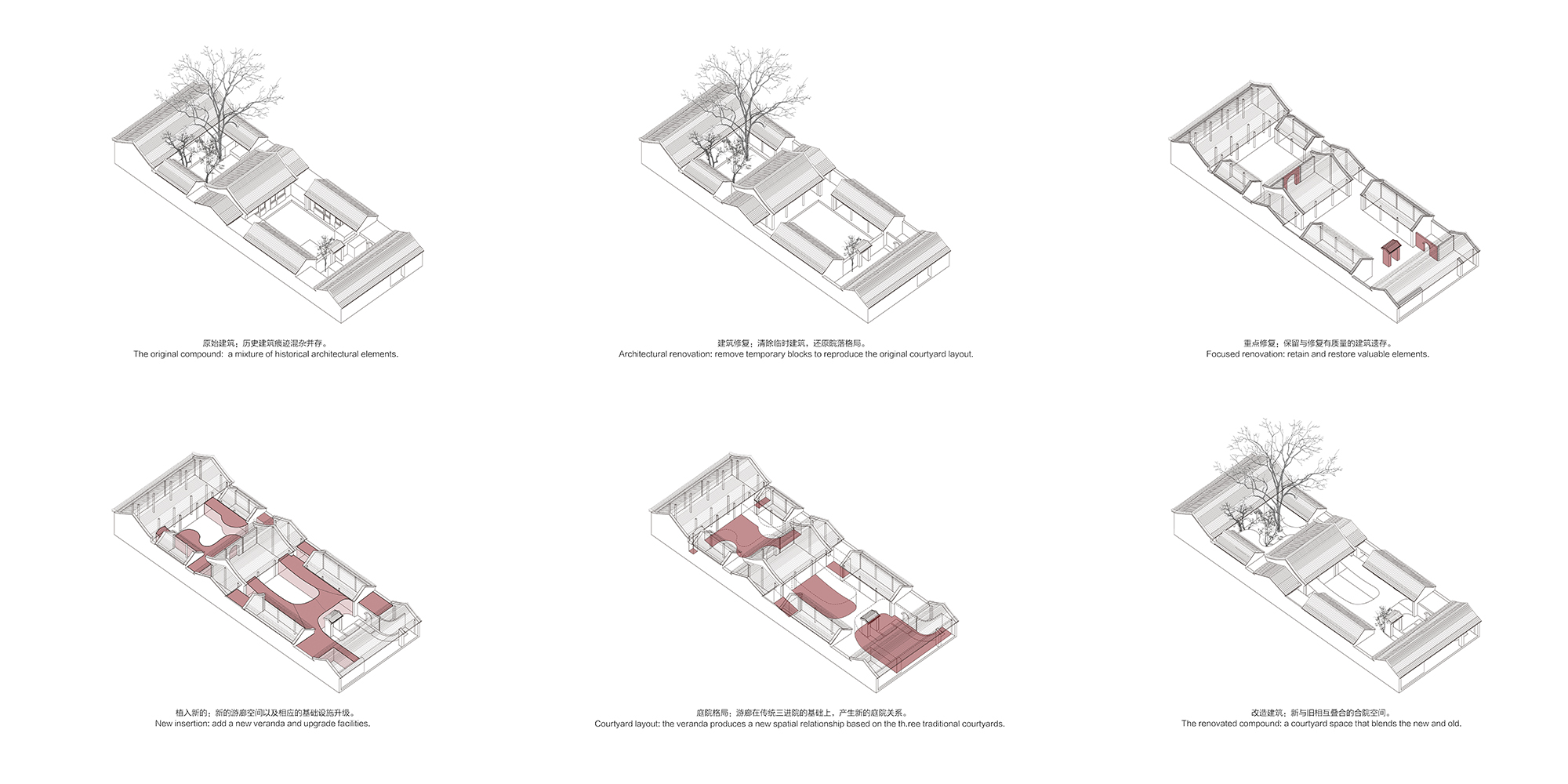 It’s named as “Qishe” (“Qi” and “she” respectively refers to “seven” and “house” in Chinese language), because its address number in the hutong is 7 and it originally consisted of 7 pitched-roof buildings. As approaching the project, the architects set two goals: renovating the old and inserting the new. On the one hand, the architects neatened the houses, repaired all the building surfaces, and reinforced the architectural structures, with a view to reproducing the appearance of the traditional Siheyuan. On the other hand, they brought in new living facilities such as bathroom, kitchen and garage, HVAC pipes and lines, as well as new veranda spaces. The veranda functions as a circulation route, reshapes the spatial pattern and layers, and provides a playful walking experience. The front courtyard is mainly used as a garage. The architects retained its pitched roof, removed the front and back walls, and shifted the entrance door to the side, so as to leave more space for parking. The middle courtyard is a public activity space. It previously contained three houses, one on the north, two on the sides. Based on its original layout, the design team set a living room, a tea room, a dining room and a kitchen, etc. in this area. The architects adopted a symmetric spatial pattern, which inherits the sense of formality of traditional courtyard buildings. The back courtyard is a dwelling space, mainly consisting of two bedrooms, a tea room, and a study. The material scheme of the project well combines the old and new. The architects preserved the textures of traditional architectural materials whilst adding some new materials in an appropriate manner, so as to retain the marks of time, and present the contrast and fusion between the new and old. The original pine wood framework of the Siheyuan was maintained, with its damaged components replaced by the same material. The traditional pitched roofs used no modern waterproof materials and had poor thermal insulation. Considering this, the design team optimized the roof system and performance on the premise of retaining the original gray tile rooftops. As to the curved roof of the newly built veranda, the architects utilized polymer mortar as the finish, which is smooth and forms contrast with the adjacent textured tile rooftops. The old building walls were restored, by reusing the gray bricks from demolished temporary architectural blocks in the courtyards.