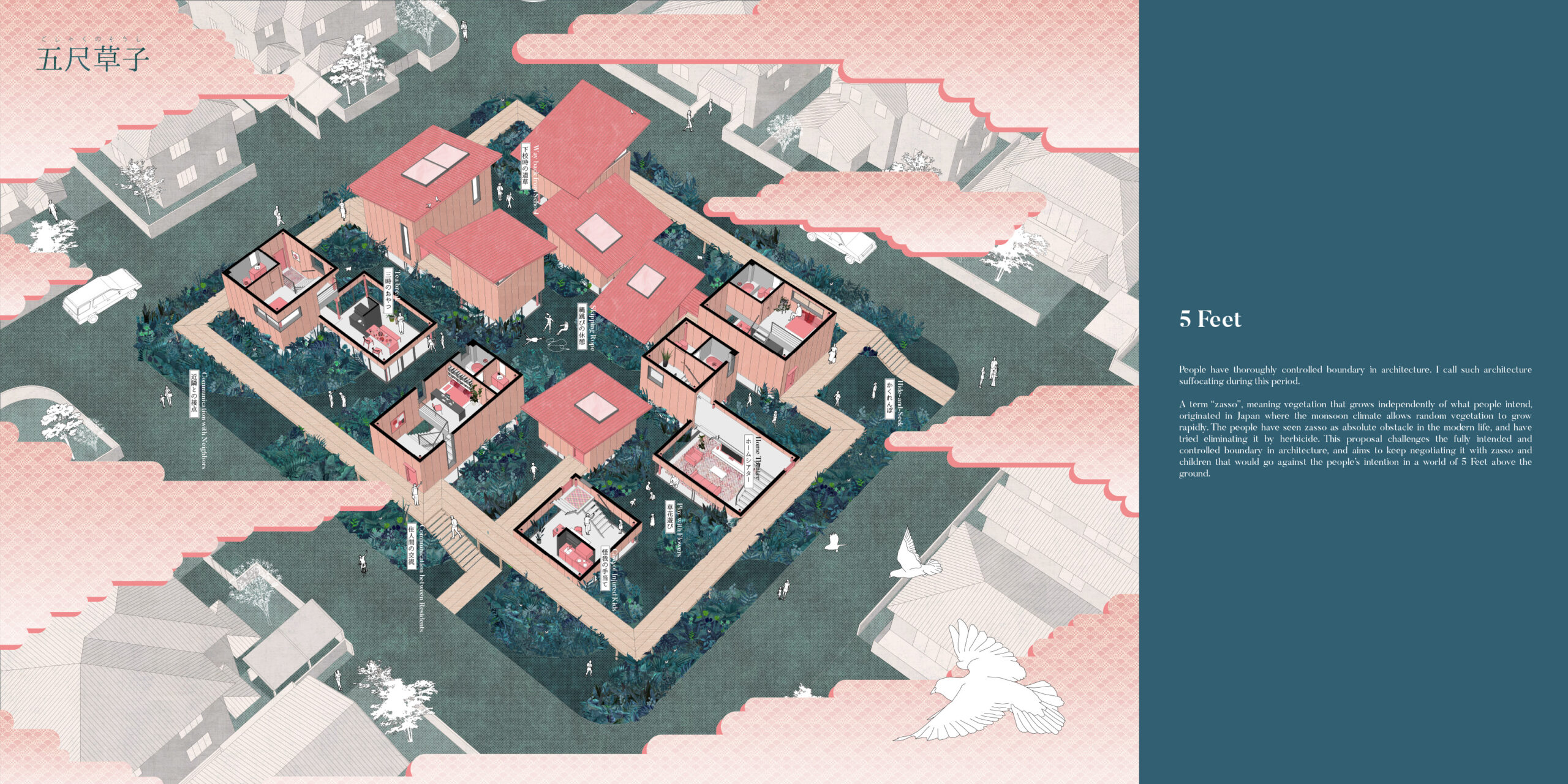 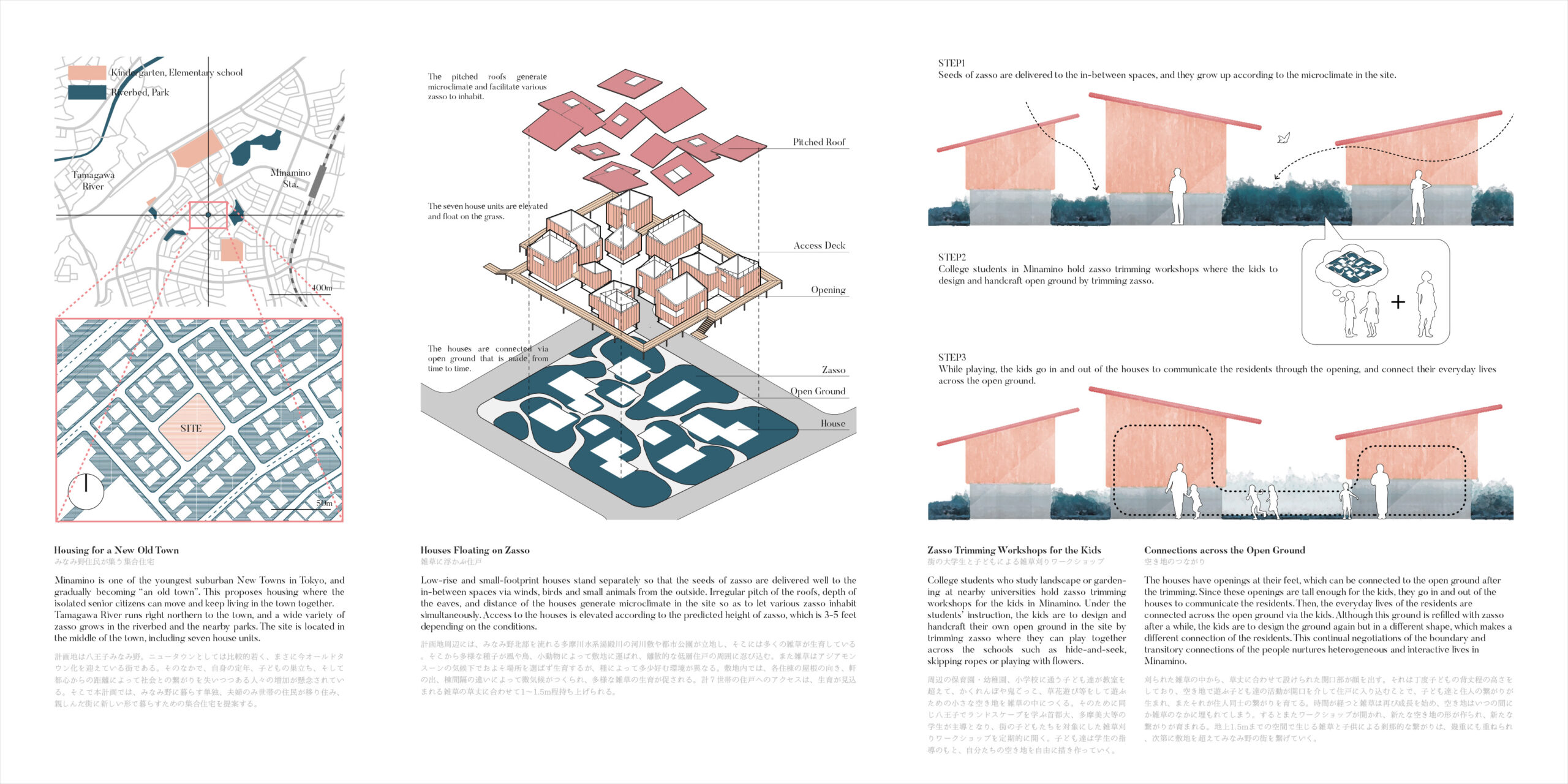 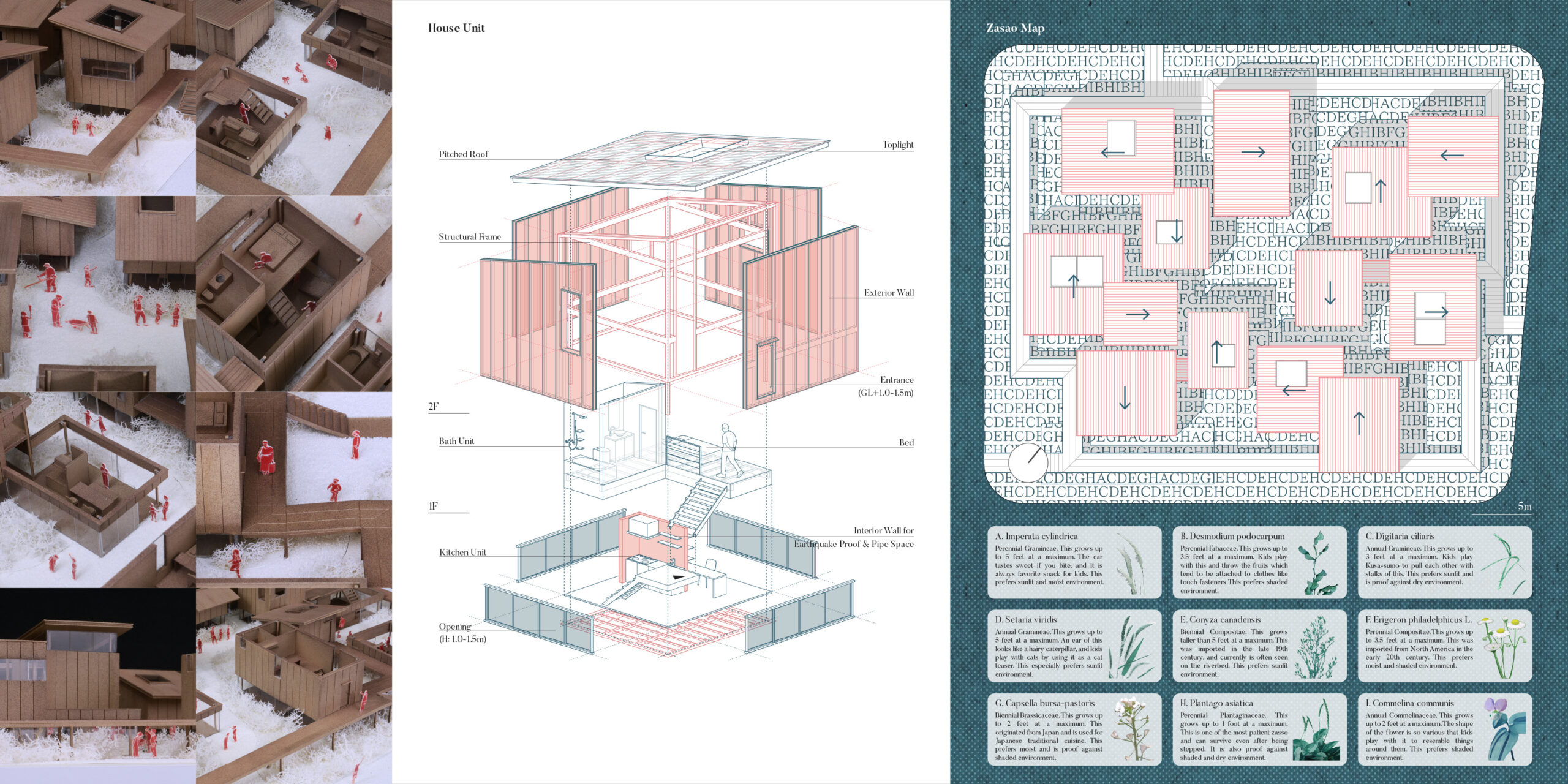 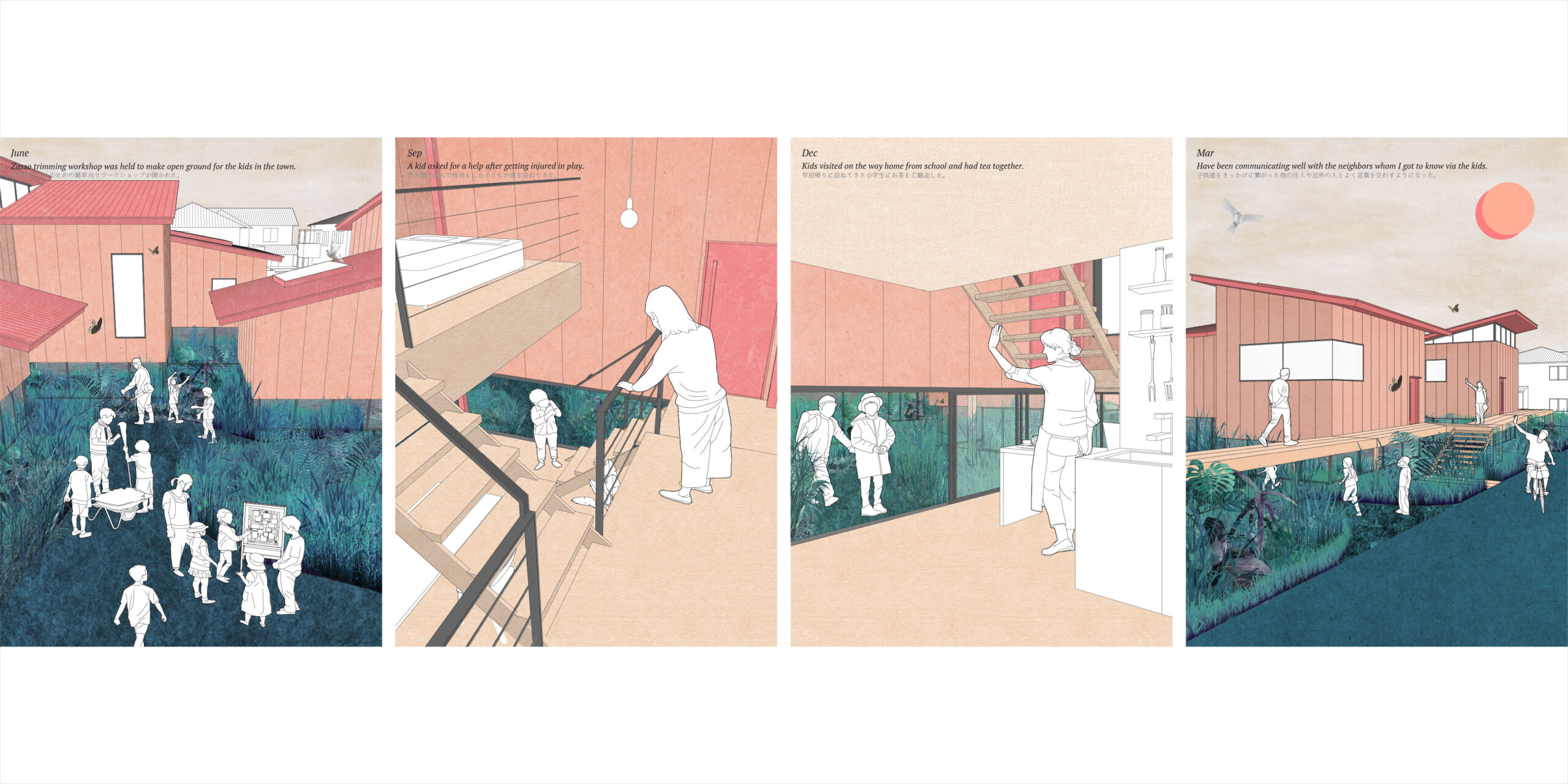 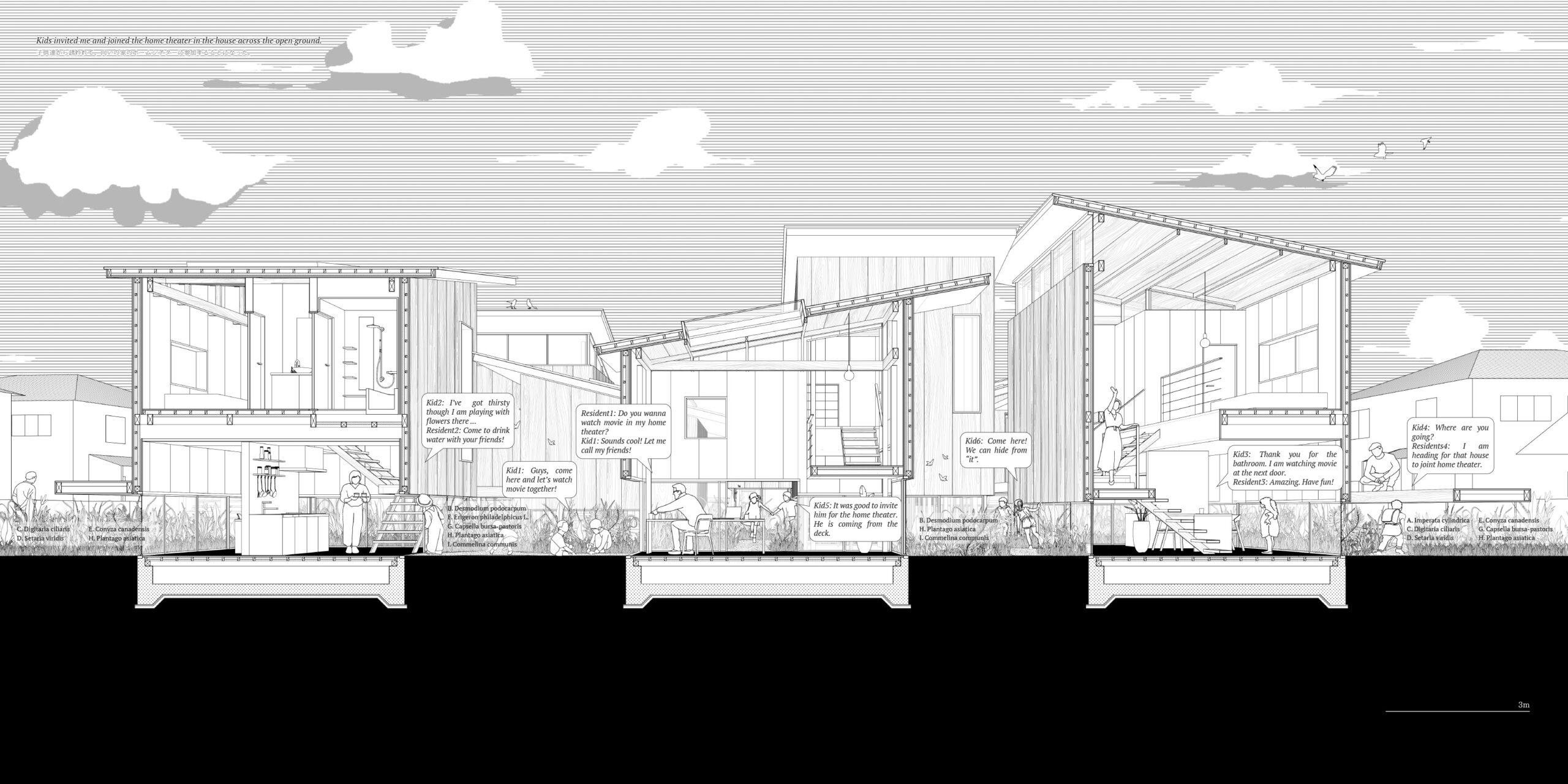 People have thoroughly controlled boundary in architecture. I call such architecture suffocating during this period.
A term “zasso”, meaning vegetation that grows independently of what people intend, originated in Japan where the monsoon climate allows random vegetation to grow rapidly. The people have seen zasso as absolute obstacle in the modern life, and have tried eliminating it by herbicide. This proposal challenges the fully intended and controlled boundary in architecture, and aims to keep negotiating it with zasso and children that would go against the people’s intention in a world of 5 Feet above the ground.

Housing for a New Old Town
Minamino is one of the youngest suburban New Towns in Tokyo, and gradually becoming “an old town”. This proposes housing where the isolated senior citizens can move and keep living in the town together.
Tamagawa River runs right northern to the town, and a wide variety of zasso grows in the riverbed and the nearby parks. The site is located in the middle of the town, including seven house units.

Houses Floating on Zasso
Low-rise and small-footprint houses stand separately so that the seeds of zasso are delivered well to the in-between spaces via winds, birds and small animals from the outside. Irregular pitch of the roofs, depth of the eaves, and distance of the houses generate microclimate in the site so as to let various zasso inhabit simultaneously. Access to the houses is elevated according to the predicted height of zasso, which is 3-5 feet depending on the conditions.

Zasso Trimming Workshops for the Kids
College students who study landscape or gardening at nearby universities hold zasso trimming workshops for the kids in Minamino. Under the students’ instruction, the kids are to design and handcraft their own open ground in the site by trimming zasso where they can play together across the schools such as hide-and-seek, skipping ropes or playing with flowers.

Connections across the Open Ground
The houses have openings at their feet, which can be connected to the open ground after the trimming. Since these openings are tall enough for the kids, they go in and out of the houses to communicate the residents. Then, the everyday lives of the residents are connected across the open ground via the kids. Although this ground is refilled with zasso after a while, the kids are to design the ground again but in a different shape, which makes a different connection of the residents. This continual negotiations of the boundary and transitory connections of the people nurtures heterogeneous and interactive lives in Minamino.