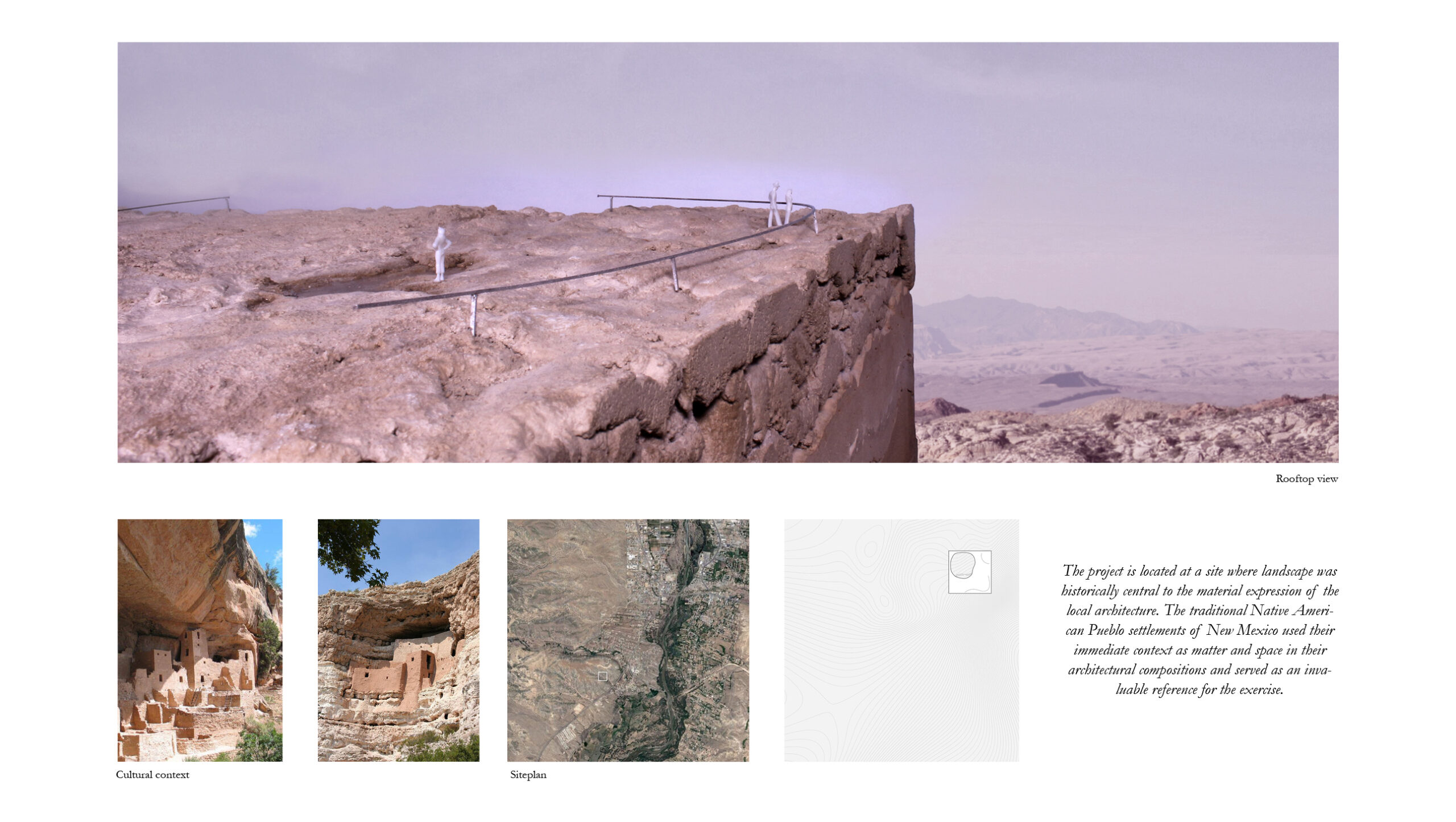 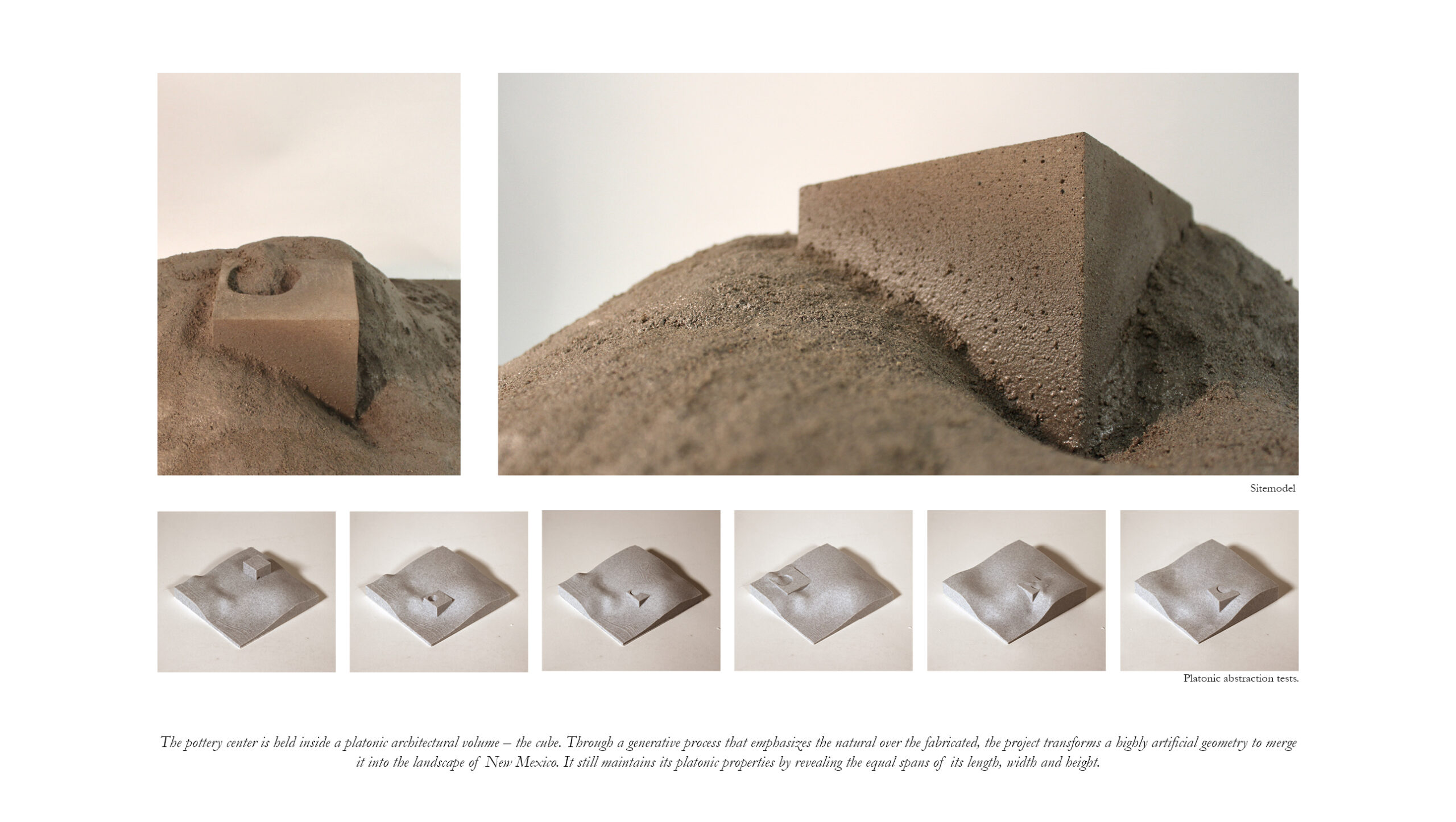 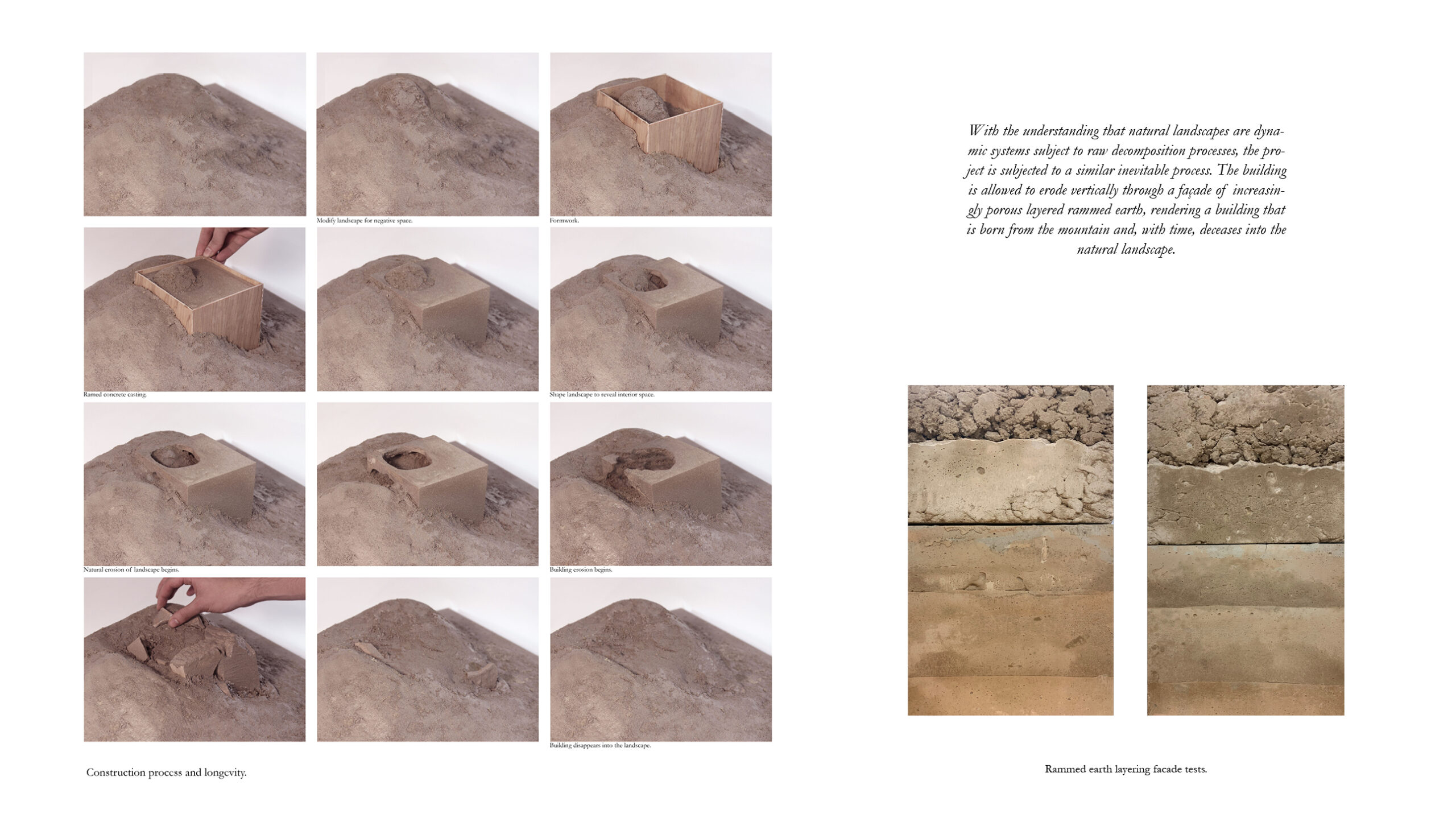 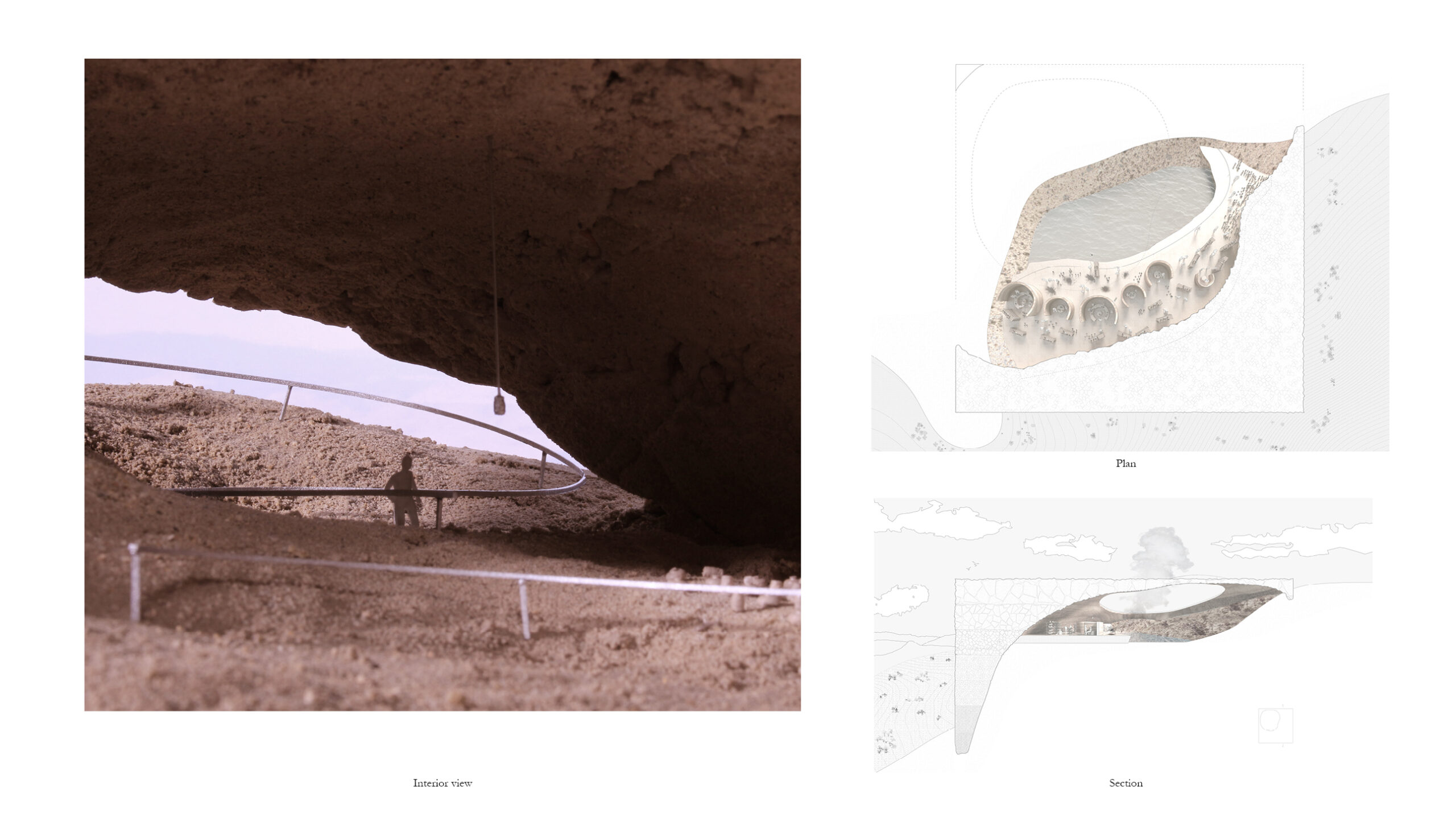 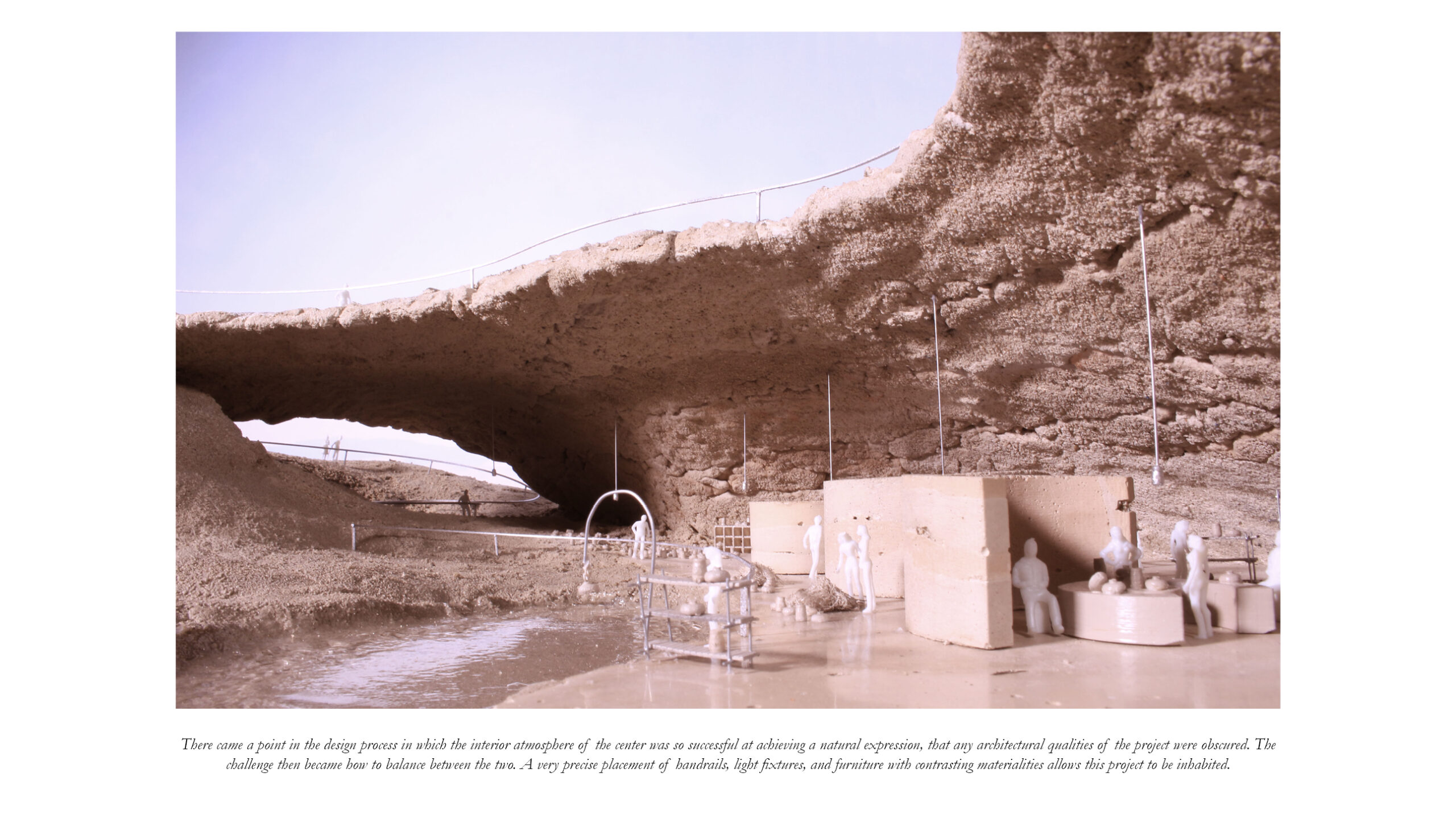 FOREWARD
Platonic Naturalism seeks to blur the line between what is landscape and what is architecture by not only utilizing a site’s immediate context as a source for building materials, but also closely examining the effect of using the natural features of the surrounding landscape in the construction process. The result renders architecture, traditionally thought of as artificial and imposed upon a site, as a harmonic natural atmosphere.
CULTURAL CONTEXT SITE
The project is located at a site where landscape was historically central to the material expression of the local architecture. The traditional Native American Pueblo settlements of New Mexico used their immediate context as matter and space in their architectural compositions and served as an invaluable reference for the exercise. Specifically, the project is placed along a significant mountain range in the outskirts of the Santa Clara Pueblo. The town has a long-standing tradition of pueblo pottery making using a process that introduces local sand (temper) into the mixture. The project’s program speaks to the area’s cultural capital and holds a pottery center for the Santa Clara area. It serves as a space for a form of expression that seamlessly integrates the natural in the creation of the artificial.
PLATONIC VOLUME
The pottery center is held inside a platonic architectural volume – the cube. Through a generative process that emphasizes the natural over the fabricated, the project transforms a highly artificial geometry to merge it into the landscape of New Mexico. It still maintains its platonic properties by revealing the equal spans of its length, width and height.
FROM MOUNTAIN TO MOUNTAIN
The design process focused on model-making experiments to address the concept. The physicality of the studies introduced a temporal aspect of the project, which investigated the building’s potential materials, construction process and lifespan. In terms of materiality and construction process, the pottery center is defined by placing formwork around the existing landscape and filling it with layers of rammed earth. The site’s unique topography is used as a negative of the interior space, which is later removed to reveal the interior of the center. Tectonically, the building speaks to the language of the caves, rocky plateaus and cliffs of its context. The physical experiments also questioned the building’s longevity. With the understanding that natural landscapes are dynamic systems subject to raw decomposition processes, the project is subjected to a similar inevitable process. The building is allowed to erode vertically through a façade of increasingly porous layered rammed earth, rendering a building that is born from the mountain and, with time, deceases into the natural landscape.
INHABITING THE SPACE
There came a point in the design process in which the interior atmosphere of the center was so successful at achieving a natural expression, that any architectural qualities of the project were obscured. The challenge then became how to balance between the two. A very precise placement of handrails, light fixtures, and furniture with contrasting materialities allows this project to be inhabited.